In the minds of the 50 or so people who gathered Wednesday afternoon at Pellissippi State Community College’s Hardin Valley Campus, the newly appointed Tennessee Commissioner of Economic and Community Development (ECD) saved the best region for the last of his nine “Town Hall” meetings across the Volunteer State.

Stuart McWhorter, who was announced on June 7 as the successor to Bob Rolfe, officially assumed the role on July 11 and has been holding similar sessions, along with economic development announcements, at a fevered pace for the past five or so weeks.

Noting what he described as “a very well-attended session,” Commissioner McWhorter said, “Today is about my opportunity to meet people who are so critical to what we do.” Attendees included a number of state and local elected officials, those involved in economic development, business leaders, and representatives of several educational institutions. 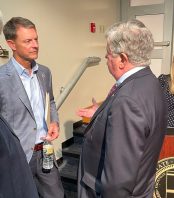 After reviewing a significant set of economic development wins for Tennessee over the past four years, Commissioner McWhorter explained that “I’m mostly a small business entrepreneur.” His heritage includes being a Co-Founder of Clayton Associates, the McWhorter family office that lists partnerships with three venture firms, and a former Chief Executive Officer of the Nashville Entrepreneur Center.

That background helped set the stage for what the Commissioner described as the “things that are super important to me.” They included:

Prior to the stop at Pellissippi State, Commissioner McWhorter visited Axle Logistics, ironically just one day after the company was announced as a listee on Inc. Magazine’s rankings of the top 5000 fastest growing privately held companies in the U.S. (see teknovation.biz article here). Launched in 2012, the company has 360 employees with significant growth plans in the next few years.

“For me (the entrepreneur and investor in start-ups), that’s a perfect story,” he said.