“The need for affordable housing has never been greater in our history,” says Angie Sledge, Chief Development Officer for the Knoxville Habitat for Humanity.

Founded in 1985 by Ellen (Sis) Mitchell, the Knoxville group is one of 49 Habitat affiliates across Tennessee and one of about 1,100 across the U.S. More important, as Sledge explains, “We are one of the few Habitat affiliates still true to our original mission . . . homeownership.”

Since its founding, the Knoxville Habitat group has built more than 650 homes with a 96 percent success rate. That means few foreclosures. In the few instances where the organization has foreclosed on the loan that the affiliate carries, the homes have been rehabbed and made available to veterans.

“We hold a silent second mortgage – the difference between what the family pays for the home and what the home is worth,” Sledge (pictured right) says. “As the family makes their monthly payments, the second mortgage decreases exponentially until it is exhausted after 10 years. If the family sells the home during that time, Knoxville Habitat recovers the remaining second mortgage balance from the sale. We also try to buy back our homes whenever possible. We rehab them and make them available on a rent to own basis for veterans.”

With today’s challenges coming out of the COVID-19 pandemic and everything from supply chain issues in housing construction to escalating costs and inflation, it’s the sort of confluence of disparate factors that the local affiliate has not faced in its nearly four decades of serving the community. However, any well-run non-profit has a solid plan to address those unforeseen challenges as we learned in a recent conversation with Sledge and Kelle Shultz, President and Chief Executive Officer (CEO) of the Knoxville Habitat affiliate.

The foundation of the strategy is the organization’s first capital campaign, chaired by long-time Habitat volunteers Marty Brown, President and CEO of PYA, and his wife Ann. More than $4.55 million has already been raised for the “Readiness Fund” with plans to push the total to $5 million by early summer. That’s a significant amount, but Shultz notes that homes previously built by the organization and its volunteers are appraising for nearly $240,000. That escalating number should not come as a surprise to anyone who watches television news or reads a daily newspaper.

“The past two years have impacted those we serve so much,” Shultz says, with Sledge adding, “Many families are paying more than 50 percent of their income for housing.”

Noting that the Knoxville Habitat affiliate receives 700 requests a year to be part of the program, Shultz uses a real-life example from an adjacent community to illustrate the magnitude of the affordable housing challenge. “Sevier County has lost its sense of hometown with employees now driving several hours to work,” she says. That includes critically important workers like firefighters, teachers and certified nursing assistants.

While Sevier County is not in the Knoxville affiliate’s service area, many of those who commute to jobs in Gatlinburg, Pigeon Forge and Sevierville live in Knox County, so having not only available but also affordable housing is a priority. Both are in very short supply locally. 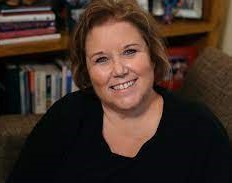 “We are focused on homeowners,” Shultz (pictured left) says. “We are a solution for someone who wants to put roots down and own something.” That solution requires a commitment from the homeowner of earning “sweat equity” hours by working to build their homes and the homes of others as well as actively participating in homeownership education that includes a weekly budgeting class. In addition, the homeowner applicant must: (1) demonstrate a need for housing; (2) have the ability to repay an affordable 30-year mortgage; and (3) commit to attending homeownership classes to learn skills in home maintenance and financial management.

The mortgage that Knoxville Habitat carries for the homeowner is interest free for up to 30 years, and the monthly payment, including the mortgage amount, property taxes, and insurance, never exceeds 30 percent of the homeowner’s income.

The “Readiness Fund” – the key component of the capital campaign – is intended to do just what its name implies. The dollars raised will be used to purchase land and prepare the infrastructure that is needed in any neighborhood.