COMMENTARY: Knoxville Chamber’s newest report should be a wakeup call for the community

When Hitachi Zosen Inova USA LLC announced on November 8 that the company was expanding its Knoxville operations by 90 jobs, Mayor Glenn Jacobs said that “(w)e are making tremendous progress toward becoming an innovation hub.”

Now, roughly three weeks after that announcement, the Knoxville Chamber is releasing what might be its most important report in years that says that the community should commit to an economic transition that makes Jacobs’ words a reality, and it is based on data that the Chamber team has been analyzing for months if not years.

Titled “Transitioning Knoxville’s Economy for the Imagination Age,” the seven-page document describes a community that many people believe is doing well – and they would be correct in saying that in the present tense – but one that needs to decide which proverbial “fork in the road” it wants to take going forward. Yet, as the Chamber has been previewing for the past several years in reports like its “Path to Prosperity” and more recent “Workforce Redefined . . . A Path to Prosperity Strategy,” that future is far from assured in spite of tremendous assets like Oak Ridge National Laboratory, Tennessee Valley Authority, and the University of Tennessee. 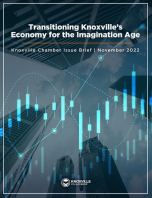 “The world is on the precipice of another transformative shift,” according to the report. “This phenomenon is being driven by the economic transition from the third industrial revolution (i.e., the Digital Age) to the fourth,” defined as the Imagination Age. Examples include fully autonomous vehicles, individualized medications, wholly 3D-printed buildings, and the wave of automation that is expected to impact employment.

The report explains that communities that want to maximize this transition’s full value “will be compelled to accelerate the development of the assets that are critical to a prosperous future: high-growth companies, high-wage talent, innovative entrepreneurs, and attractive civic furniture.”

For the Chamber, the question is fairly straightforward: “Should it (Knoxville and Knox County) stay on its current path, which, for all intents and purposes is good, or should it embrace the fact that the global economy is on the precipice of a significant disruption, and it needs to be prepared for it?”

Obviously, the Chamber team believes the answer rests in embracing what is coming proactively, and the report uses data comparing Knoxville and Raleigh, NC, a city in the heart of the vibrant Research Triangle Park, to make the point.

Noting that Knoxville continues to grow at what is characterized as a “measured pace,” the report says other peer communities like Raleigh are accelerating past Knoxville and Knox County. Since 2011, Raleigh and Wake County have increased average annual pay (AAP), a strong indicator of a community’s economic health, from $47,272 to an estimated $69,235 in 2021. That’s an increase in actual per capita income of $21,963 or 46.5 percent. How do Knoxville and Knox County compare? They were less than $7,000 behind their North Carolina peers in 2011 but are now just shy of $12,000 behind.

What does that mean? The Chamber estimates that for every $1,000 increase in AAP, $1.8 million in local economic impact is generated.

The newly-released Chamber report also cites a 2021 study from the McKinsey Global Institute that highlighted the impact that future automation will have on economic sectors. Manufacturing topped the list at 60 percent of jobs that could be lost to automation followed closely by transportation and warehousing (59 percent), agriculture (57 percent), accommodation and food services (54 percent), and retail trade (52 percent).

What does that mean for Knoxville and Knox County? The Chamber extrapolated McKinsey’s numbers across the local occupational landscape and noted the potential for about 83,000 jobs that could be lost.

Adding additional fuel to the concerns is something that the Chamber, in particular, has cited for the past few years. It is “the community’s miniscule growth over the last decade” in the 25- to 54-year old age group that fills jobs, start companies, have families, and buy homes. “They are the talent pool that businesses desperately need to succeed.”

Again, using data, the report cited Knoxville’s growth in this demographic of 3.3 percent between 2010 and 2020 compared to 8.5 percent in nearby Asheville, 8.8 percent in Chattanooga, 12.1 percent in Greenville, SC, 14.4 percent in Nashville, 20.5 percent in Raleigh, and 20.6 percent in Durham-Chapel Hill.

“Considering the evidence, it is clear that Knoxville must commit to an economic transition that positions itself to take advantage of the coming global upheaval which will ensure that the community not only doesn’t fall behind, but instead garners a greater level of prosperity,” the Chamber report declares.

Not surprising, key areas of emphasis are “increasing the amount of innovative talent” at the K-12 and post-secondary levels that produce the workforce needed in fields like artificial intelligence, quantum science, and biotechnology that will drive the Imagination Age. Two other closely related areas of emphasis are: (1) attracting and retaining innovative entrepreneurs which requires an enhanced level of support, capital, and infrastructure elements; and (2) building-out the civic furniture that makes the city more attractive to the youth who want to start businesses or accept jobs here to significantly address the 25- to 54-year old problem.

The Chamber “is pledging to guide this transition, in coordination with its partners and the entire business community. There is no doubt that Knoxville has all of the aspects necessary to do so. There simply needs to be a willingness to forego good in the pursuit of great.”