The U.S. Department of Energy’s (DOE) Oak Ridge Reservation is a job-creation engine, accounting for more than $7 billion in economic benefits and supporting nearly 43,000 full-time jobs, according to a report released this morning by the East Tennessee Economic Council (ETEC).

The report examines the impact of DOE’s investment in Tennessee in FY 2020 and shows a significant additional impact since the last study conducted in 2017. The impact reported then was $5.6 billion in economic benefits and 34,360 full-time employees.

“Oak Ridge is home to a wealth of innovation and creativity, with world-class scientists and researchers and cutting-edge facilities that contribute to enhancing our national security, improving the environment, and advancing scientific discoveries,” ETEC President Jim Campbell said. “This report confirms the importance of DOE’s presence in Tennessee, cementing the state’s stature in scientific leadership and contributing to its economic success.” 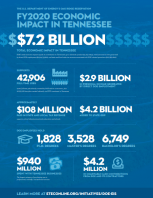 The report, available at this link, details the scope and scale of DOE’s impact in the State of Tennessee. It looks at job creation, state gross domestic product growth, private-sector procurements, payroll and pension disbursement, state and local tax contributions, and the ripple effects of spending across the state. Those are reflected in the attached graphic.

Key findings from the report include:

The report also features a series of case studies highlighting how the Oak Ridge Reservation and the East Tennessee prime contractors that support its operations impact the region’s economic viability and contribute to DOE’s science, security, and cleanup missions.

Research on the latest DOE economic impact report was conducted by ETEC and the Howard H. Baker Jr. Center for Public Policy at the University of Tennessee, Knoxville.