Callie Archer is the upbeat President who has a big vision for Junior Achievement of East Tennessee (JAET) through a specially-outfitted trailer that will take the organization’s entrepreneurship programming to new, underserved communities in its 17-county service area.

Now, thanks to partners and donors, the possibility will become a reality. Those supporters include the Appalachian Regional Commission, The Hollingsworth Foundation, Highland Communication, First Century Bank, Ullrich Print Plus, Harper Auto Square, local Chambers of Commerce, and local educational partners

In a recent interview, Archer, a long-time staffer at the Clinton-based non-profit, shared the concept for what she has termed the “Mobile Business Accelerator” which she says will support the organization’s flagship offering – the “JA Company Program®” (JACP) an entrepreneurship program for high school students. 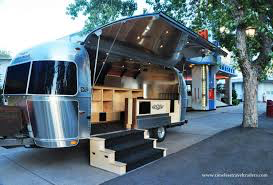 “I want it to be sleek and modern, not just a box truck,” Archer says in describing her vision. Readers might think of a sleek Airstream trailer (see photo at right) that is outfitted as a multi-purpose modern concession stand/pop-up shop with customizable point-of-sale systems, displays, and signage so that students can elevate the retail experience of their newly launched company.

“The JACP students would be able to launch, run and promote their student created business beyond a corner in the classroom,” she says. “It would give them a real sense of ownership of a trendy retail space. It would be an identifying ‘entrepreneurship’ landmark as it traveled to schools, local festivals, markets, fairs, and local businesses.”

Archer says that one of the drivers for the concept is input from high school students who have repeatedly told her, “I just wish we could run a real store.” With the “Mobile Business Accelerator,” they will have that opportunity.

In addition to being a place where JACP students could operate their businesses, the trailer would also be available for use by others during downtime which Archer says would occur. “It will be a fully-outfitted mobile pop-up shop that other ARC grantees, our community partners and start-ups can utilize for product launches or events,” she says. Those uses could generate revenue to support JAET in general and the operation of the trailer specifically..

“We plan to make this a community resource,” Archer adds.

As far as the impact, she says she hopes the “Mobile Business Accelerator” will help JAET start 20 student run companies a year for five years. “We see it as a pipeline . . . preparing students for college or the workforce, giving them real world work skills and a foundation in running a business that they cannot get anywhere else. We see what we are doing as the beginning of the entrepreneurial pipeline for the East Tennessee region with a focus on rural communities.”

Archer joined JAET in 2008 and had several different responsibilities in development and operations before being named President in January 2018 when she succeeded Chip Reed who moved to Junior Achievement of Alabama. JAET has a history of success with this program and was one of two of JA national affiliates to win $25,000 under the “JA Innovation Award” established by The Hartford to reward those that have effectively implemented the JACP flagship offering.

“We run over 30 different programs across the region,” Archer explains, noting that they range from those held in K-12 classrooms to digital programs to onsite offerings. In addition to the JACP offering, the organization also operates JA BizTown in Clinton where, during a day-long experience, elementary age students are able to put into action what they have learned in classes about starting and operating businesses.

As noted on the JAET website, the organization addresses three key needs:

Like all non-profits, Archer says JAET has more opportunities to enrich the lives of K-12 students than it has the resources, both in financial terms and the availability of volunteers. Often more of the latter are needed.

“We get real entrepreneurs to go in the classroom or meet with the students virtually to help with the JA Company Program – they love share their experiences,” she says. “The students think that this part of the program is really cool.” The Mobile Business Accelerator will be retrofitted and rolling out for the pilot program this Fall.  The full launch of this new venture will be this Spring. Those who want to help with this cutting-edge educational program are invited to contact her at callie@jaeasttennessee.org.