“You have to get people here; you have to sell your vision,” long-time Knoxville developer John Turley told attendees at Wednesday evening’s third session of the Spring edition of the “Vol Court Speaker Series & Pitch Competition.”

He was referencing the way that he initially sold retailers and others on the massive Turkey Creek retail development in West Knoxville, but that advice was just as appropriate to any entrepreneur starting a business. You have to sell your vision, whether it’s a technology that is going to change the world or an app that is the greatest thing since sliced bread.

In Turley’s case, he was developing a 400-acre site covered by regulations of two different governmental jurisdictions – Knox County and the Town of Farragut. The vacant farmland also included wetlands that provided another challenge. So, how did he sell the vision? Turley said he took people on airplane trips so they could visually see what he had in mind.

“It’s a big puzzle,” he said of the world of a developer. “The pieces have to come together.”

Today, Turkey Creek is a mixed-use commercial development with 2.5 million square feet of office, medical, retail, hospitality and residential development that reflects about a half-billion dollars of investment.

Turley compared the real estate sector today to what happened in the early 1950s as the Baby Boomer explosion hit. “What we are experiencing right now is not a bubble,” he told the student attendees. “It’s a reaction to not building for the past 10 years.”

In answer to a question about the changing nature of retail, he said that big box stores like Target and Walmart will be reducing floor space dedicated to onsite retail and allocating the freed-up space to warehousing items for delivery to consumers.

“You guys have an exciting future,” Turley told the students. “There’s so much information available to you. There’s no room for people like me that just go out and do it.” 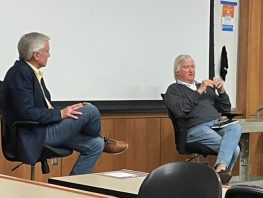 The “Vol Court Speaker Series & Pitch Competition” is hosted by the Anderson Center for Entrepreneurship and Innovation (ACEI) at the University of Tennessee, Knoxville. The fourth session in the five-part series on February 23 features Lia Winter, Co-Founder of Winter Innovations. Her topic is “Making Pitches that Win Moola!”

On March 2, students who have participated in at least three of the four sessions will pitch their ideas for cash prize money and other services.