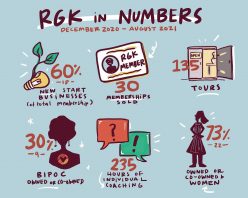 Topping our news and notes wrap-up from last week is a great graphic that Ayumi Bennett did for Bailey Foster and Real Good Kitchen (RGK) to show the progress at the shared kitchen and food entrepreneurship hub since its opening in early January. Located on Magnolia Avenue just a few blocks east of Downtown Knoxville, RGK is a passion for Foster who noted in an email last week that three businesses used the facility on its first day of operation. Now, there are 30 member companies. In typical fashion, she notes that “The real victories . . . are the ones that we celebrate every day with our members – the courage they show, the new recipes and processes they develop, all the markets they attend, the challenges and mistakes they overcome.”

There are a number of other highlights from the week.