Jamie Dimon’s tremendous respect for military veterans and his commitment to helping accelerate the success rate of those veterans who become entrepreneurs after they leave the service were clearly on display late Thursday afternoon in Nashville.

The event was the Music City stop on Bunker Labs’ “Muster Across America Tour” that featured a fireside chat with the Chairman and Chief Executive Officer (CEO) of JPMorgan Chase & Co. His firm has committed $3 million to the national Bunker Labs organization to help it launch a significant national expansion strategy that will result in the creation of Bunker Labs chapters in all 50 states by 2021 (see our recent teknovation.biz article).

As Dimon took the stage, he saluted the more than 200 attendees – both veterans and their significant others – and received a standing ovation. He again saluted them after the discussion ended, underscoring what to me was both a corporate and personal commitment to the cause.

We had the opportunity to join Meg Garner, a Reporter with the Nashville Business Journal, for a “two-on-one” press availability with Dimon before the fireside chat, and the seemingly always smiling CEO was consistent in the views he expressed in both venues about military veterans turned entrepreneurs.

The 63-year old son of Greek immigrants recalled a conversation that he had with Retired U.S. Navy Admiral Michael Mullen where the distinguished public servant reminded him of all the training military women and men receive in areas like teamwork, logistics and even after-action reports.

Dimon then offered Mullen’s punchline: when their time is up, “we give them a duffel bag and kick them out.”

While not saying it this directly, Dimon suggested that more could and should be done such as the work of Bunker Labs. If that happened, we would reverse a startling trend. When World War II ended, 50 percent of the veterans started their own businesses after returning from Europe and Asia. Today, the number of veterans who leave one of the services is four percent.

“We owe more to veterans than any other class of citizens,” Dimon declared, later saying, “The strength of our economy and the strength of the military go hand-in-hand.”

The public portion of Dimon’s appearance at the Muster also offered some insights into the way he leads JPMorgan Chase. Clearly, with its sponsorship of the Bunker Labs expansion, the CEO is a believer in strong corporate engagement.

“Lifting-up communities is part of our job,” Dimon said of CEOs like himself. “As a business leader, it’s our responsibility to be involved.”

He also voiced on several occasions the importance of a longer-term view, atypical of many corporate executives.

“I don’t care about quarterly earnings,” Dimon told the attendees, noting that “things don’t happen overnight.” The entrepreneurs in the audience could clearly identify with that reality since scaling a start-up generally takes several years at best, but probably much longer.

His responses to questions were delivered in a rapid-fire fashion, particularly as Dimon explained his thoughts on the economy and public policy.

“The U.S. is the most prosperous nation the world has ever seen,” he said. “We grew (the economy) at 20 percent the last 10 years. It should have been 40 percent.” Dimon attributed what he termed “the anemic growth” to factors like over-regulation; litigation; “mind-numbing bureaucracy” at the federal, state and local levels; obesity; and the sizable number of uninsured citizens.

“If we get back to three percent annual growth, that will help address many of our needs,” he said.

The stop in Nashville also reinforced that fact that JPMorgan Chase plans a significant expansion to the city, opening 20 retail branches in the next few years. While the nation’s largest bank has operations here, the branches will be its first retail facilities in Music City or anywhere else in the state.

Nashville was day four on a periodic bus tour that Dimon and some of his executives take to listen to clients and employees. He came to Music City from the Research Triangle area of North Carolina, well-known as a technology hotbed. We saw a post about that stop from former Oak Ridge National Laboratory colleague Doug Speight who wrote: “It’s not everyday that you’re invited to lunch by the CEO of a $108B bank. Many thanks to Jamie Dimon for a candid conversation about JPMorgan Chase’s support for Black Entrepreneurs.”

Speight, Co-Founder of AnnexTech Partners, an enterprise SaaS software commercialization firm, is one of the speakers at the upcoming “36|86 Entrepreneurship Festival” August 28 and 29 in Nashville. Here’s a picture of Dimon (left) and Speight. 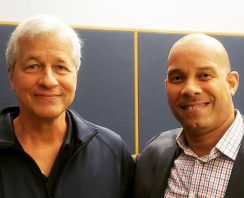