It’s a busy time for Tricia Martinez, Managing Director of the “Techstars Industries of the Future Accelerator,” who just put the wraps on the Boulder-based organization’s first cohort in late May.

She’s following-up with each of the 10 participants to gain their feedback along with representatives from the three sponsors – Oak Ridge National Laboratory (ORNL), Tennessee Valley Authority (TVA), and the University of Tennessee (UT) System. Martinez is also talking with other key supporters in the community as she is already in recruitment mode for the second cohort that will arrive in April 2023.

Oh, and for good measure, she and her husband (Samer Saab) are preparing for the arrival of their first child in November even as Martinez launches a new virtual accelerator for Techstars and is in the early stages of conceptualizing a third one. 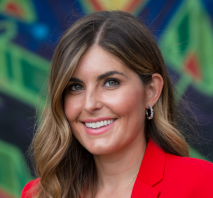 “The first program and cohort exceeded my expectations,” Martinez (pictured right) told us recently. That was in part because two of the participants – FLUIX and Silvis Materials – announced at “Demo Day” that they would establish a presence in Knoxville going forward. The former, which is commercializing a technology to reduce heat in high-performance computing centers, will design and assemble its Turbulent Liquid Cooling devices here. Silvis Materials is developing low cost, 100 percent bio-based materials for the $26 billion polymer emulsion market and will establish its research operations in Knoxville.

“I’m also really excited with how the companies plugged-in with the lab (ORNL),” Martinez said, adding that the community was very engaged and calling-out for particular recognition the Knoxville Chamber and the Sheltowee Angel Network for hosting panels where the companies were able to pitch to angels.

“All of these things were massive,” she said.

Looking forward to the 2023 cohort, Martinez says that the feedback she has been getting could suggest some tweaks. One possibility might be a reduction in the actual time the entrepreneurs would be in residence in Knoxville.

“I’m open to more of a hybrid model,” she says, with perhaps five weeks onsite. During the time the start-up founders are here, Martinez visualizes many more community-driven events. “I was receiving inquiries from community groups wanting to host events as the 13-weeks were concluding,” she says.

A key question that needs to be answered is this one: “What does the community want and need to get even more involved?”

One area that Martinez will emphasize more in 2023 is a focus on greater engagement of employees within the three partner organizations. She learned during Cohort 1 that many employees at ORNL, TVA and UT were not aware of the program until the end.

“We need to tap the partners more,” she says.

Many wondered after the name – “Techstars Industries of the Future Accelerator” – was announced last year if the focus would be fine-tuned after the first year to the more sector-specific approach that Techstars traditionally uses. “I’m not inclined to try to narrow the focus,” Martinez says, explaining that she saw significant value in the broader range of possibilities.

As far as the new virtual accelerator, she says it is named “Techstars Payments Powered by Stellar and MoneyGram” and is focused on FinTech and Blockchain. Applications opened yesterday, close September 28, and the first cohort starts January 3. And, Martinez has a third accelerator in mind, but she wants to keep its focus a secret for now.

To help with the additional moving parts, she’s adding a Chief Operating Officer, an Investment Associate for both the “Industries of the Future” and FinTech/Blockchain accelerators, and a Marketing Associate.