The Knoxville-based start-up won over four other companies in what one of the judges described as a “very close” competition.

The pitch event was held yesterday morning with the judges deliberating for a long time before settling on Innovasan. The results were announced at the end of the first full-day of Life Science Tennessee’s annual conference.

“I feel very thankful and blessed,” Jeff Hubrig Jr., Manager of Business Development, said. “Moving on to SEBio is amazing.”

Innovasan won a $5,000 cash prize from the Waller law firm, a five-minute pitch video from Benchfly, and a company video to be showcased during the opening reception of the regional “Southeast Bio Investor & Partnering Forum” (SEBio) next month in Atlanta.

“This year’s slate was the strongest in the history of the event,” Waller Partner Hunter Rost said he heard from many conference attendees. MB Venture Partners Co-Founder Gary Stevenson, one of the four judges, noted that it was the most geographically diverse group ever.

The competition ultimately came down to two companies – Innovasan and EndoInSight, according to Chris Rand, Co-founder and Partner of TriStar Technology Ventures, another judge.

For Innovasan, it was a competition that might have gone unnoticed except for an event that Hubrig learned about at the last minute. Baker Donelson hosted a series of regional meetings this summer with Life Science Tennessee, including one in Knoxville. The night before the event, Hubrig said he received an email from Jim Biggs of the Knoxville Entrepreneur Center urging him to attend.

It was Hubrig’s first Life Science Tennessee meeting. Innovasan learned about the “Venture Forum” that morning and subsequently applied. As they say, the rest is history.

The other companies in the finals were:

In the picture below, Hubrig (left) accepts ceremonial check from Rost. 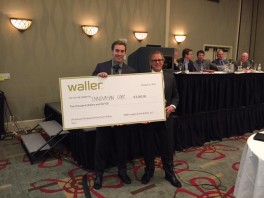