As noted in this recent teknovation.biz article, the inaugural “TEDxOakRidge” event attracted about 50 people to the Albert Einstein Amphitheater at Ts117 Modern Coworking Tuesday night.

Thanks to organizer Daniel Hodge, I had the privilege of joining three other individuals for what can only be described as an eclectic set of topics. Mine was on the city’s 75-year history of entrepreneurship and two current programs – “Innovation Crossroads” and the Bredesen Center for Interdisciplinary Research and Graduate Education, a joint initiative with the University of Tennessee – that are bringing young, dynamic entrepreneurs to the community.

The three other presenters were Lindsey Lieb, who described her latest start-up venture named Happego (see our recent teknovation.biz article); Michael Weller, a Physicist and Experimental Plasma Diagnostician with Proton Scientific who described some of the cutting edge work the company is doping in fusion; and Justin West who brought his passion for the environment and sustainability to the group in a talk titled “Closed Loop Agricultural Design: The Boon Project.”

Ahead of the start of the talks, we chatted with Rick Chinn of R & R Properties who said that occupancy in the facility at 701 Scarboro Road has grown to 42 percent which exceeds their projections after just a few months of operation. 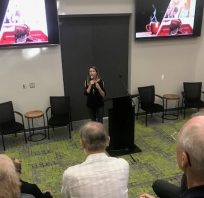 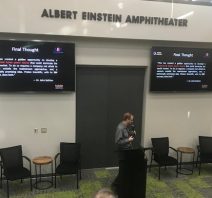