West Knoxville-based Innovative Design Inc. (IDI) is not just focused on its own business, but is also committed to helping the community. Now, through a partnership with Knox County Schools (KCS), IDI is bringing the expertise of its team to an initiative to help educators maximize their understanding of CAD (computer-aided design) and use of 3D printers to educate the next generation of the region’s technical workforce.

The project, launched with a training program for KCS teachers Friday at IDI’s headquarters in Hardin Valley, builds on an initiative that we mentioned in a two-part teknovation.biz series (Part 1 and Part 2) that we posted about two years ago.

As IDI Founder Cindy Hollander explained in those articles, she wanted to find ways to give back to the community that had supported her company over a then 20-year history. One way to do that was an initiative conceived by Kevin Fillers, IDI Business Manager. Called the Entrepreneur Assistance Program (EAP), the effort provided prototyping services for local start-ups by drawing on IDI’s designer and engineers during their infrequent but occasional the downtime.

How beneficial has that been? At last count, more than 25 start-ups had taken advantage of the opportunity. Yet, those who know the engaging and energetic Fillers will agree that he has many ideas and is not afraid to try to advance them.   Now, he has found a new opportunity that holds great promise for a region where a technically-prepared workforce is critical.

“We wanted to get a lot more going in the educational area,” Fillers told us during a recent interview. To do so, he started working with KCS’ Green Magnet Academy where he discovered a real opportunity to help teachers better understand emerging technologies like CAD and 3D printing that are second nature to the employees of IDI.

“I thought that CAD to a (3D-printed) object was going to capture the imagination of so many students,” Filler says. So, he reached-out to April Lamb, a STEM (science, technology, engineering and mathematics) Coach, now Facilitator, with KCS. Her role is at the district level, working with 88 schools across the county.

The more they talked, the more Fillers and Lamb realized IDI could help provide much-needed expertise for teachers, many of whom lacked the understanding of software like Solidworks 3D CAD and, therefore, ways to fully utilize 3D printers that were located in classrooms and libraries.

The result was Friday’s half-day workshop at IDI that was taught by several of the company’s designers. It is not the end, but rather the beginning of what Lamb and Fillers hope will be an ongoing effort to enhance use of these and other software and hardware technologies in the classroom. (In this photograph, Fillers is working with one of the teachers.)

Both see the collaboration as building the region’s talent base for both the future workforce and employers. More important, they hope other companies like IDI will join the effort.

For Lamb, a former television journalist and certified teacher, it’s about “helping our students see all of these opportunities and putting a face on those jobs.” Fillers has a complementary viewpoint, coming more from the perspective of employers.

“I think CAD is such a cool career,” he says, noting that individuals with a two-year degree in the field can earn $50,000 or more annually. “There’s a recurring message . . . young people out of school don’t have all the tools we need. This will help the area produce better talent.”

IDI used a lesson plan that allowed the teachers to create a chess pawn. 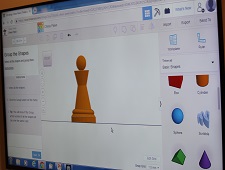