(EDITOR’S NOTE: This is the first article in a series spotlighting the members of Cohort 6 of the “Innovation Crossroads” program operated by Oak Ridge National Laboratory.)

Rajan Kumar was raised in the Hudson Valley area of New York by Indian immigrants. As a first generation American, Dr. Kumar has always been interested and history and government policy. His goal was to enter politics thinking it would be a way to have a positive impact on society This plan changed, however, after he suffered severe burns in an accident during high school that left him hospitalized for a year.

“That experience made me appreciate science,” the Founder and Chief Executive Officer of Ateios Systems explains. Today, he has a revenue-generating business with venture backing from Good Growth Capital (see news release announcing the over-subscribed, $1.25 million Series Seed financing round here), and big plans to revolutionize the production of small batteries during his two-year fellowship as part of Cohort 6 of the “Innovation Crossroads” (IC) program operated by Oak Ridge National Laboratory (ORNL).

“Ateios will enable a Moore’s Law of batteries through its innovative electrode manufacturing techniques,” the company declares on its website, and the first product named Enercalm is already on the market. Designed for high-power wireless communication devices, it increases manufacturing speeds by 10X, reduces processing costs by 5X, reduces the carbon footprint associated with battery manufacturing, and decreases the size necessary to create giga factories.

ORNL noted in this news release that “the adaptable technology holds promise to enable the widespread use of lightweight, flexible batteries for products like continuous glucose monitors, sleep trackers and other devices that allow people to monitor conditions and make proactive decisions. In the long term, Ateios Systems seeks to expand into electric vehicles and power grid applications.”

Kumar adds that the non-toxic nature of the process is another significant benefit. He also draws an analogy with how a newspaper is printed to illustrate his ultimate vision for mass producing the ultra-thin batteries for wearable devices and the Internet of Things, or physical objects embedded with sensors or processing systems.

“What we want to do with our batteries is make them invisible,” he says while adding, “You don’t know that you are wearing it.”

During his undergraduate years at The State University of New York at Albany (SUNY Albany), Kumar studied Nano Engineering and eventually graduated with one of the first Bachelor of Science in Nano Engineering from SUNY Albany. He also helped found the biotech start-up Gluconix, which won the New York State Business Competition in 2014.  After graduating, he moved across the country to pursue his Ph.D. at the University of California San Diego (UCSD), where he continued to focus on Nano Engineering by making smart devices for preventative care. 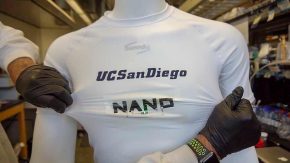 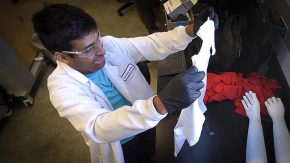 Kumar received funding for his Ph.D. from the National Science Foundation (NSF) and was also part of a $5 million U.S. Department of Energy grant through its Advanced Research Projects Agency – Energy (ARPA-E) program that produced the world’s first printed stretchable battery shown here in two photos.

“That was the basis of starting the company,” he said.

In 2019, Kumar became one of the first people to earn a complete degree in Nano Engineering by receiving his Ph.D. in from UCSD. After graduating, he moved Ateios to the state of Indiana to participate in the Heritage Group’s Techstars Program. Today, Ateios Systems, founded in 2017, is located in The Battery Innovation Center in Newberry, IN and has 10 employees. It also offers customers the ability to design their own batter using the company’s interactive battery builder to build the right solution to their power needs.