(EDITOR’S NOTE: This is the second article in a series of article spotlighting the members of Cohort 6 of the “Innovation Crossroads” program operated by Oak Ridge National Laboratory.)

The native of Dallas and recent Ph.D. graduate of the University of Illinois Urbana-Champaign was a participant in the 2021 edition of the “AgLaunch Bootcamp” organized by the Memphis-based non-profit in conjunction with the Knoxville Entrepreneur Center. That’s where she met IC Cohort 5 member Tommy Gibbons of Hempitecture who encouraged her to apply for Cohort 6 and also became a seed investor in Agriwater.

Her start-up is focused on addressing a serious environmental challenge for livestock farmers, specifically those defined as concentrated animal feeding operators (CAFOs). They are regulated by the U.S. Environmental Protection Agency because they generate millions of tons of manure every year. When improperly managed, the manure can pose substantial risks to the environment and public health. In order to manage their waste, CAFOs have developed agricultural wastewater treatment plans. The most common type of facility used is the anaerobic lagoon, but it has significantly contributed to environmental and health problems.

Dr. Bailey, as she prefers to be called, paints a picture of just how challenging the problem is.  Simply stated, about the 500 million tons of toxic manure waste is generated each year on these farms that ends up in rivers causing pollution, sickness, and death of aquatic life. In addition, millions of tons of CO2 and methane are emitted into the atmosphere due to animal manure.

Agriwater has developed a mobile wastewater treatment unit that is specifically designed from the input of farmers to not only address the environmental and disposal issues, but also to turn the manure into a revenue generator for farmers by providing clean water, organic fertilizer, and carbon credits.

It is based on what she describes as “an old technology” – electrolysis – that applies an electric current to the animal waste. The treated water has much less of the traditional foul odor as well as reduced toxins and greenhouse gases (GHGs). 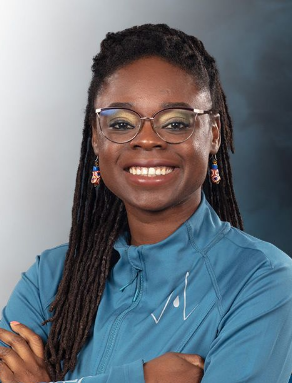 “When you reduce waste, you are reducing greenhouse gases,” explains Dr. Bailey (pictured here in an  ORNL provided photo). The process also captures phosphorus, one of the main three nutrients most commonly found in fertilizers. That can further reduce the expense side for farmers.

Dr. Bailey visualizes the commercial version of the mobile unit would be located inside a shipping container. For now, she has a lab scale version and is working on a second iteration of the minimum viable product. She is also focused on raising about a million dollars to develop a mid-size version of the unit.

“Our target market is livestock farmers who have a central facility for manure storage,” Dr. Bailey says. Those are likely to be farmers who have more than 200 animals and are classified as CAFOs.

Leveraging “Innovation Crossroads” resources and industry partnerships, she expects that Agriwater will have a demo pilot scale of the mobile water treatment system for early adopter farmer trials by the time to two-year fellowship ends.