For Philip Stuckey, it was his company idea that drove what he went to college for, and not the other way around.

“I had those changes in those fields because I was following the problems and the research that goes along with the technology more than I was just following engineering and academic concepts,” Stuckey said.

He would later do post-doctoral work through the University of Tennessee, Knoxville, doing lab research in Oak Ridge National Laboratory (ORNL). So far, he’s been researching hydrogen fuel cells for around 16 years. 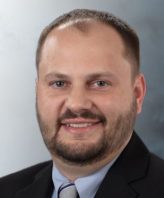 Stuckey is the Founder and Chief Executive Officer of FC Renew, a member of Cohort 5 of “Innovation Crossroads.” He initially became interested in hydrogen fuel cells his freshman year of college. While in school, he also began taking entrepreneurial classes and decided he wanted to make an impact on environmental issues with his own company. His passion for the topic drove him all the way to Iceland, where he did a study abroad to see a hydrogen fueling station. The experience was eye-opening.

“I naively thought at 19-years-old that’s also where they did the research, but that wasn’t at all the case,” Stuckey said.

FC Renew is working to expand the hydrogen fuel cell technology that is available today, making the cells more durable, Stuckey said. Fuel cells take hydrogen from the tank and combine it with oxygen from the air. These elements recombine in the fuel cell to create water, electricity, and heat. Stuckey is more focused on the catalyst within a fuel cell, which is comprised of a membrane and platinum components.

Fuel cells in commercially available passenger vehicles have durability of around 5,000 hours which equates to about 150,000 miles on the road. Right now, the entire industry is focused on heavy-duty applications such as trucks and ships that transport goods around the county. Fuel cells need advancements that can keep these trucks on the road for 30,000 hours or 1.2 million miles. However, the solutions are not so simple, Stuckey said.

“The stacked fuel cells for these bigger trucks can be more durable but by making them more durable, you increase their robustness, which decreases their overall efficiency,” he said.

Stuckey’s work at FC Renew is to develop a model where the platinum inside the fuel cell can be renewed. He estimated that by doing this you can bump the time on the road for trucks up to the 30,000 hours, or 1.2 million miles goal.

“As we want to expand the hydrogen economy in the United States and globally, this technology will enable a cost-effective end-use hydrogen,” he said. “Because the technology is currently limited in durability, that increases the cost over the lifetime of the vehicle.”

Platinum is an expensive material to build with. Stuckey said another option the industry has looked at is to add more catalysts to fuel cells to make them last longer. But with more platinum being added in, the cost is driven up.

Stuckey hopes that eventually, truck drivers can renew the platinum in their engines like an “oil change for your fuel cell.” Renewing the platinum will extend the life of the material, keeping it from becoming waste. Stuckey said he also hopes his work can extend to aviation and maritime applications.

Through “Innovation Crossroads,” he is looking forward to developing the company and the technology simultaneously. “This program puts those resources together in the most incredible way,” he added. He also wants to continue with feasibility studies to strengthen his proof of concept.

Before joining “Innovation Crossroads,” Stuckey was working with the U.S. Patent and Trademark Office as a Patent Examiner specifically looking at fuel cell and battery applications. Stuckey said he resigned from his role in Washington D.C. and will relocate to Knoxville for “Innovation Crossroads.”