(EDITOR’S NOTE: This is the third article in a series on Cohort 3 of “Innovation Crossroads.” Earlier this year, the cohort graduated from the program. Each article will focus on what’s next for the innovators and their companies).

After focusing on software and simulations during the pandemic, Grid Fruit is moving back into in-person pilots testing energy-saving measures in grocery stores.

Jesse Thornburg, Co-Founder and Chief Executive Officer of Grid Fruit, recently graduated from the “Innovation Crossroads” program. Due to the shutdown, lab spaces at Oak Ridge National Laboratory were harder to access because of safety measures. Instead, Thornburg said, the company focused on components of Grid Fruit that could be done from home. His business partner in Pennsylvania was also able to access lab space for a working testbed there, which kept them floating until Thornburg could get back into ORNL. 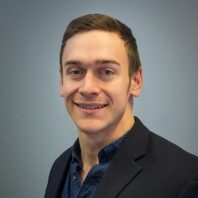 “Thankfully, we could do a lot in software, and we had some physical space in Pennsylvania,” he said. “We had a lifeline separate from Oak Ridge.”

Learn more about Grid Fruit in this teknovation.biz article.

Before starting at “Innovation Crossroads,” Grid Fruit had begun testing its product through a pilot in Pittsburgh in 2017. Thornburg continued to work on pilots while in the program, wrapping up a pilot in October 2020 with Southern California Edison on simulations of food stores in the utility’s service territory.

Originally, Thornburg said, Grid Fruit was chosen to deploy in person, installing its sensors and controls technology in select stores. But in March 2020, the coronavirus brought on a change of plans. Instead, Thornburg and his team performed digital simulations aggregating all the convenience stores in California at Edison’s request.

“That was our first revenue, so that was a milestone for us,” Thornburg said.

In these simulations, Grid Fruit tailored its code to run with modeling software funded by the Department of Energy (DOE). Thornburg and his team would build the layout of the individual stores and map out how air conditioning interacted with refrigeration and lighting. Its algorithms would then schedule machine cycles to decrease how much power the stores used to meet grid needs based on the season and time of day.

During the pandemic, Thornburg said that many of the contacts he reached out to wanted to avoid in-person installations. Now that some restrictions have been easing, Thornburg said he is reaching back out to those same businesses that are re-opening.

One opportunity is a new pilot that Grid Fruit is working on with stores and an industrial food manufacturer in Vermont. Things are starting to move back toward in-person deployments, Thornburg said.

“That’s what we plan to do in this upcoming pilot, initially across the refrigerators and freezers of a general store in Vermont, with the utilities also planning for other locations that we can expand to,” he said. “For the pilot during COVID, it was more about doing physics-based and data-driven models of stores.”

In addition to this pilot, Thornburg said Grid Fruit wrapped up a Phase I Small Business Innovation Research (SBIR) grant from the DOE and is in final due diligence for a Phase II grant to extend that project. The new grant is in partnership with ORNL.

During the Phase I, Thornburg said Grid Fruit hired two staff members to help with that research. With the Phase II funds, he is hoping to use the fund extension from “Innovation Crossroads” to expand the team with additional hires. (Due to the pandemic, “Innovation Crossroads” and DOE leadership have given Cohort 3 no-cost extensions on some of the program’s funding, including travel and research funds.)

Besides those staff members, Thornburg was able to bring on two interns through funding from the Launch Tennessee Internship Program. The interns were able to help with data and dashboard development. As noted in this recent article, Grid Fruit was one of 19 from the Knoxville area selected to receive partial matching funds from Launch Tennessee now that the organization has reopened the SBIR Matching program.

“(The interns) enabled us to set up a dashboard where customers and stores can visualize their data and get real-time alerts when anything goes out of balance,” he said. “That’s been great, especially for these small stores that don’t have any traditional way to track their machinery when they’re out of the physical space.”

The Phase II grant in partnership with ORNL will allow Thornburg to use some of the specialty equipment, such as the supermarket-scale refrigeration system, which allows him to fine-tune their product.

“We are continuing active collaboration with the lab,” he said of the company’s future.

Thornburg has also been speaking with local utility boards in the area to possibly work with them.