Eight years ago, the lead paragraph in one of our feature stories in teknovation.biz read as follows: “Haseeb Qureshi is one of those multi-faceted, multi-talented entrepreneurs whose new start-up leverages his formal education, self-training, and personal passion for music and performing artists.”

Our assessment of the individual known by the initials HQ was made because of his diverse skills and interests. Qureshi moved to Knoxville in 2007 to attend the University of Tennessee, Knoxville (UTK) College of Law. He had already earned a double major in business and psychology from Carnegie Mellon University. And, just for good measure, Qureshi came with self-taught talents as a coder, something he had been doing since his sophomore year in college.

In the ensuing years, the start-up that we referenced changed names from Artist Gig to Audiohand, then was put on hold. Qureshi began teaching others about entrepreneurship, starting with the Young Entrepreneurs Academy organized by the Knoxville Chamber, and later serving as an Adjunct Lecturer at UTK’s Haslam College of Business. In 2017, he joined the Morehous Legal Group on a part-time basis before becoming full-time that summer.

Then, he and his wife Sarah welcomed twins not quite two years ago, something that Qureshi admits “creates a new lens for me. I decided that I needed to make something of my own again.” That idea began germinating in 2020 after their birth and got stronger as 2021 progressed.

Today, as he outlined for us his plans going forward, we could tell that Qureshi was super-excited about where he has decided to focus his professional attention, allowing time to focus on his family, too. It’s a one-person, at least for now, law practice he plans to open along with reviving Audiohand and becoming a full-time Lecturer in the Haslam College. 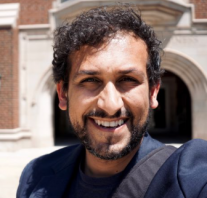 “I’m going to be busier than I’ve ever been,” Qureshi (pictured right) says, adding, “I’m happiest when I’m busy doing the things I love.”

He credits David Morehous for helping him gain a better understanding of items like securities law and business structure. “I learned a lot from David . . . he gave me a lot of freedom.”

His new firm is named Forthlaw, and the concept is what Qureshi characterizes as “my possible moonshot at law.” It will provide services focused on early stage entrepreneurs for a fixed fee.

“I’m bringing both a lawyer’s brain and a tech brain,” he says, explaining that Forthlaw is not something that he just dreamed-up. He had decided on the name several years ago but was unsure of exactly how he would implement his vision that is clearly enunciated on the firm’s webpage. “(I) literally started this firm to blend the best parts of the attorney relationship, the problem solving that’s so fantastic, with the reliability and durability of tech legal services. My goal is to make legal more accessible, reliable, and reasonable.”

Those who know Qureshi would expect that he has researched the opportunity carefully. In our interview, he cited two companies – Clearspire and Atrium – that tried to offer something similar to Forthlaw but failed. Why was that the outcome? Qureshi believes both lost sight of what they were building and for whom.

“Entrepreneurs need to be able to open a document and have an understandable narrative,” he says. “It’s risky,” particularly his vision that the service model he imagines can be scaled fast in other cities once he proves the concept in Knoxville. “It’s more than just transparency. It’s aligning steps in the engagement with the client at every major point. We need a clear follow through procedure at every step of the way, and I believe technology can augment traditional services.”

Right now, he has the luxury of spending a few months developing his minimum viable product before he launches the tec-based service. All of that will occur this summer ahead of starting his work at UTK as Fall Semester begins.

“I want to provide better access to legal services at less cost,” Qureshi says. “I feel tough and believe more in myself that I ever have.”