“I’m a Spanish major. I have no business running a business,” Hannah Lee continuously stated in one way or another during her presentation on Wednesday evening to student attendees at the third session of the “Vol Court Speakers Series and Pitch Competition” hosted by the Anderson Center for Entrepreneurship and Innovation.

It was the way the Co-Founder and Chief Executive Officer of Knoxville’s Second Mile Marketing emphasized that those who aspire to be entrepreneurs should not let their educational preparation hold them back. In fact, Lee stressed that individuals are only limited by the way they view themselves.

Today, the six-year-old company that she launched with longtime friend Jess Vossler has 10 employees and clients ranging from local enterprises like the University of Tennessee, Knoxville (UTK), and GRIDSMART to franchisees of Chick-fil-A. 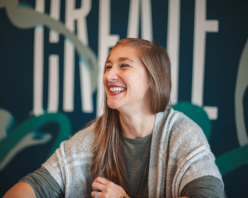 In a fast-moving and interactive session, Lee (pictured right) described several “big moments” that propelled her and Vossler to launch the firm. The first was a career-ending injury to her hand while competing as a Division 1 lacrosse player that caused a transfer to UTK.

Noting that she did not consider herself a social media influencer, Lee said she joined Young Life after transferring to UTK and developed an anonymous Twitter account that was a parody. “It really took off,” she said, adding thousands of followers when Twitter was still somewhat new. “I discovered I really enjoyed creating social media content that created a community of followers.”

For the next several years, she worked for a start-up in her hometown of Memphis and some “really cool (advertising, public relations, and marketing) agencies doing really cool things, but I was miserable,” Lee explained. “I love to be part of building something . . . from the ground floor up.”

Vossler and Lee kept discussing ideas for start-ups but dismissed them until they settled on a marketing firm. In an at times self-deprecating approach, she deadpanned, “There are not many of those, are there?”

There were two “big moments” in that decision. One was the duo’s belief that there was a different way to do marketing – go the extra distance, hence the firm’s name, and leave all those with whom the firm comes in contact better than Second Mile’s team found them. The other was when they took a leap of faith and posted on social media that Second Mile Marketing had been launched.

“That made it real,” Lee said.

Citing the “big moments” she shared with attendees, Lee told them that “nothing is wasted” from the experiences they have had. “Think back to those ‘big moments’ and use them.”

Her second piece of advice was “go in, then out,” answering questions such as do you have what it takes, do you see a problem with a creative solution, and do you have support? On the latter point, Lee suggested any successful entrepreneur needed five key supporters. One is behind you protecting your back; another is beside you with arms linked as you move forward; the third is ahead of you providing guidance as your north star, and the other two are friends the entrepreneur can count on.

“So much of running a business starts with you and your character,” Lee added.

At the end, she offered to meet one-on-one with any of the students and provided a QR code for them to access her schedule.