Hafta Have and Velos Labs each won $2,000 in the fourth iteration of the Nashville Entrepreneur Center’s “Pitch for Good” series help yesterday afternoon.

The former serves retailers, helping them identify and text their shoppers about the exact items they want to buy, before they buy them, while the latter provides an autonomy add-on kit for military vehicles to improve their safety.

As described by Amanda Latifi, Co-Founder and Chief Executive Officer, Hafta Have provides a tool for retailers, particularly the smaller ones, drive conversion rates. “It’s the missing dataset in retail,” she explained.

Mock Abdelaal presented Velos Labs, noting that it was targeting the U.S. Department of Defense where 53 percent of the Army’s vehicles are Humvees and are not expected to be replaced in the near future with autonomous, smarter vehicles.

Following earlier editions focused on start-ups addressing the pandemic and those with women and Black founders, yesterday’s program spotlighted new ventures in data, analytics and artificial intelligence (AI). It was held in conjunction with the Greater Nashville Technology Council’s annual “Analytics Summit 2020.”

As is customary for each “Pitch for Good” competition, the viewing audience – more than 120 people for yesterday’s event – selected an audience favorite – CaringWire. The company was founded by Michael Sentz who explained that he watched his own mother struggle with caring for her parents. Launched at the end of 2019 as a “digital care platform,” Sentz said he had 1,000 users.

The next “Pitch for Good” will have a music and entertainment focus when it is held at 1 p.m. EDT on October 22.

Here’s a screen shot from yesterday showing the judges and the participants with a notice of another upcoming event. 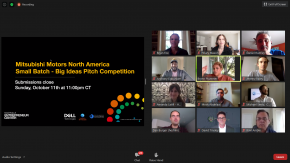