(EDITOR’S NOTE: The article that follows was written by Amy Blakely, a freelance writer, for the University of Tennessee-Oak Ridge Innovation Institute {UT-ORII}. The just approved State of Tennessee budget from 2022-23 included $72 million for UT-ORII. Blakely retired from the University of Tennessee, Knoxville’s Office of Communication and Marketing in 2020. For most of the 15 years she worked there, she was the Assistant Director of Media Relations. Before that, she was a newspaper reporter, City Editor, and Bureau Chief for 21 years.)

Whether at work or enjoying her downtime, Joan Bienvenue is a marathoner.

Bienvenue has just completed her first year as the first Executive Director of the University of Tennessee-Oak Ridge Innovation Institute (UT-ORII), an umbrella organization launched in 2021 to align the expertise and resources of the university and Oak Ridge National Laboratory (ORNL) to support world-class research and education. She’s also a Vice Provost for UT, Knoxville.

Bienvenue sees a lot of similarities between leading UT-ORII and running marathons.

“Running, the way I do, is an endurance sport,” Bienvenue says.

Likewise, bridging the gap between UT and ORNL “is an exercise in persistence – a marathon. We’ve worked together for decades, but with the Institute, we’re taking our partnership to a new level. And, of course, anytime you’re building something new, particularly with two very different organizations, there will be hurdles along the way – things you have to work through. Now, a year into it, I look back and can really see the progress we’re making. We’re building something impactful for Tennessee and our country; and it’s going to yield unique and wonderful opportunities. That’s exciting!”

Bienvenue, who grew up in New Hampshire, began running in junior high. She continued competing in track and field and cross-country events in high school and at Rivier University in Nashua, N.H., where she earned a bachelor’s degree in chemistry.

As a northeasterner, the Boston Marathon always intrigued her.

Today, Bienvenue trains by running 60 to 80 miles a week, mostly along the greenbelt hugging the river in Oak Ridge.

She loves the mind-clearing solitude of running. 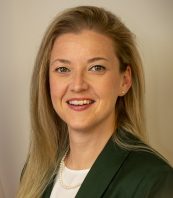 “It’s where I do some of my best thinking,” she says, joking that her staff cringes when she starts a meeting by saying, “While I was running today, I had an idea ….”

Bienvenue also has mentored young girls through the “Girls on the Run” program, a national non-profit organization focused on helping third- to eighth-grade girls develop core values like competence, confidence, character, caring and contribution through lessons that incorporate running and other physical activities.

Bienvenue has run marathons all over America – from the Boise Marathon in Idaho to the Bank of America Chicago Marathon in Illinois, to the Wineglass Marathon in Corning, NY, to the Shamrock Marathon in Virginia Beach, VA. She plans to run the New York City Marathon for the first time this fall.

She flew to Duluth, MN, to run the Grandma’s Marathon (named for a sponsoring restaurant) in 2019. The course ran along the scenic North Shore of Lake Superior, and Bienvenue found it glorious.

“Running marathons is a good way to see new places,” she says. “I don’t know what else would have gotten me to Duluth, but I’m so fortunate to have had the chance to see such a beautiful area.”

Despite all of the marathons she’s run, Bienvenue says “Boston is always going to be my favorite. It was the first, it’s the oldest, and it’s the one that people aspire to.”

Held on Patriot’s Day, the third Monday in April, the Boston Marathon is considered challenging, yet still achievable for the amateur runner.

Runners need a qualifying time from another marathon based on their age and gender.

“Qualifying for the Boston Marathon is one area where you don’t mind getting older,” she jokes. Having just turned 45, she’s in a new age category this year.

She needed a 3-hour, 50-minute finish to qualify; her Chicago Marathon finish – 3 hours and 14 minutes – gave her plenty of breathing room.

As they approach Wellesley College – about the midway point – they start to hear the screams of female students who form a human corridor for them to run through. At Heartbreak Hill, the grueling uphill stretch about six miles from the finish line, there are crowds of people on the street “cheering you on and watching you suffer.” In the final stretch, students from Boston College line the sidewalks and at the finish line, runners are met by cheering Red Sox fans leaving Fenway Park after the traditional marathon-day baseball game.

“There is no better feeling,” she says.

Because she was still getting back into running shape after having her two children—Molly, 10, and Elliott, 12 – Bienvenue didn’t participate in the Boston Marathon in 2013, the year domestic terrorists detonated homemade bombs along the route, killing three people and injuring hundreds.

Having run the marathon before and after the bombing, she’s seen how security measures have been beefed up.

“But because I’ve worked with the national security community during my career, I know it’s impossible to secure a 26-mile stretch of road through different towns.”

Still, Bienvenue says, the marathon is more popular than ever.

“Someone once said, ‘The last people you want to irritate are those who run 26.2 miles for fun.’”

Bienvenue was recruited to UT-ORII because of her experience working with both academic and governmental agencies to advance research and education.

Before coming, she spent nearly eight years at the Applied Research Institute at UVA in Charlottesville. As that agency’s first Executive Director, she worked to grow research, education, and training, with an emphasis on global and national security. Prior to that, she was Program Manager and Chief Scientist for the development of Lockheed Martin’s rapid DNA analysis platform. And before that, she worked as the Supervisor of Validation and Quality Control for the Armed Forces DNA Identification Laboratory in Rockville, MD.

“The best part of the UT-ORII is the people,” she says. “You’ve got brilliant researchers, faculty members who are committed and brilliant, as well. They are committed to the students and building new programs for workforce development and research.”

She’s been impressed by the broader community, too.

“The commitment of Tennesseans to their state and the programs we’re building is amazing,” she says.

East Tennessee has unparalleled resources: a national lab, a top-notch university, abundant natural resources, a growing business and industry base, a strong workforce, a supportive state government, a great central location in the country, and a favorable climate. Not to mention, it’s a great place to raise a family.

“It’s a region that has it all,” she says. “Our potential is kind of limitless.”