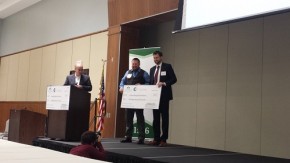 This is the second year that a Knoxville company won the event. Last year’s winner was General Graphene. And, this year was the first time that two Knoxville companies were invited to compete. The other was Innovasan.

“While we did not win a large prize at the Rice competition, we really understood more about what made our business model attractive to investors, and I was able to incorporate that into the competition here,” Bova told us in an email last night. “We had five minutes to pitch and three minutes for questions, which really meant that I had to be very concise yet very compelling at the same time.

“It’s been a huge honor to represent the Bredesen Center  . . . that program has encouraged graduate student entrepreneurship in the sciences so much, and developing the partnerships with ORNL has been invaluable to us. As the second company to bring this award back to Knoxville, I hope we’ve started a trend that will persist as more amazing student-led companies continue to pop up in the Knoxville area.”