A company that utilizes artificial intelligence to deliver just the correct coffee options to its customers captured the top prize in the fourth edition of “Pitches & Pints.”

The competition, held Thursday night in Downtown Johnson City, drew seven presenters and about 75 people in all to The VENUE at King’s Centre. “Pitches & Pints” is organized by the “Startup Tri-Cities” group led by David Nelson, Edwin Williams and Arnab Chakraborty.

While the event was focused on Northeast Tennessee, Knoxville was represented beyond just yours truly and my wife. Cliff Caudill, Chair of SCORE’s Greater Knoxville Chapter, was one of the five judges, and Elizabeth Rowland of the TN-China Network, who was in the area on business, joined the festivities.

By winning to competition, Jeff Rainey of Grassy Ridge Coffee took away $1,000. Other winners were Caleb Taber of Tempak who won free intellectual property legal services, and Chase Day of Ready Up! Gaming Café who won a gift certificate to attend the next CO.STARTERS class.

Brad Batt, Founder of BlueZebra Sports, served as master of ceremonies. His company is based in Spark Plaza (see this article from Friday’s edition of teknovation.biz) as is Grassy Ridge Coffee and Nelson’s BrewFund.

Ahead of the seven pitches, Nelson spent a few minutes familiarizing the attendees with the sponsoring organization. “We have a give before you get mentality,” he explained. “We are a flat network . . . open to anyone.” As noted in a recent teknovation.biz post, Nelson said that “Startup Tri-Cities” has reorganized into a 501(c)(6) membership organization and will be encouraging groups to host their own events.

Presenters in the order they pitched were:

Here’s a picture of all the presenters, judges, and key principals in “Startup Tri-Cities.” Thanks to Rowland for providing it. 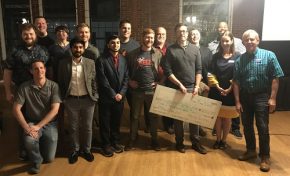