Tennessee is becoming known for its increasing emphasis on all aspects of the electric vehicle (EV) industry, and that focus was on display yesterday during the first-ever “Global EV Battery Innovations Conference.”

The nearly all-day event originated from the Administration Building of the Tennessee Department of Transportation with what appeared to be a full room of attendees and an unknown number of others who joined virtually. The program was organized by the Smart Factory Institute Tennessee and featured a variety of speakers including two representing companies with strong ties to the Knoxville-Oak Ridge region.

A first of its kind program in the U.S., the Smart Factory Institute is operated by Peak Performance Inc. in partnership with Volkswagen Academy Chattanooga, Deutsche Messe Technology Academy, Tennessee Chamber of Commerce/Tennessee Manufacturers Association, and the University of Tennessee Chattanooga. 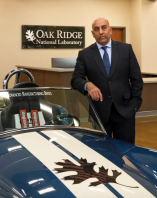 The keynote address was delivered by Sanjiv Malhotra (pictured right), Founder and Chief Executive Officer (CEO) of SPARKZ Inc., the start-up that we spotlighted a little more than a year ago in this February 2021 teknovation.biz article. Founded in 2019, the company is commercializing the only high energy-density cobalt-free, lithium-ion battery made in America, a goal that Malhotra says is critical to maintain U.S. leadership in EVs.

Since our interview about 14 months ago, the company has made significant progress which Malhotra outlined in his presentation where he emphasized the importance of having an adaptable business plan. Initially incubated in the Manufacturing Demonstration Facility (MDF) at Oak Ridge National Laboratory (ORNL), he noted that much of the “world came to a standstill” soon after SPARKZ executed a license with the lab in February 2020. That required the start-up to modify its initial plans to “adapt to changing market conditions. We avoided R&D and jumped right into engineering and product development. We accelerated a four-year plan into less than two years.”

Malhotra added that a key driver for SPARKZ change was millions of dollars of purchase orders and memorandums of understanding in hand by Q3 of 2021.

As part of its modified go-to-market plan, the start-up moved out of the MDF as the pandemic began to abate and into a small, 1,000-square foot lab in Knoxville. In the past month, SPARKZ has expanded into a 30,000-square foot facility in the city.

“We made the first shipment of our battery pack to a customer earlier this month,” Malhotra said, adding that the start-up plans to open its first Gigafactory not later than the end of Q3 in nearby West Virginia. It will be the first of several planned around the country.

We had hoped to hear an update from Megan O’Connor, Co-Founder and CEO of Nth Cycle, but another Co-Founder – Chief Technology Officer Chad Vecitis – substituted for her. O’Connor took the start-up through the “Innovation Crossroads” program, operated by ORNL, as part of Cohort 2. Since relocating to Boston, the company has made great progress, most recently announcing the closing of its $12.5 million Series A financing round in February (see teknovation.biz article here).

“Our mission is to enable a low-impact, streamlined supply of critical materials for the energy transition,” Vecitis told attendees, reinforcing the title of his presentation that was titled “Revolutionizing Critical Mineral Supply Chain for Cleantech Growth.”

Noting that there has been very little change in close to a century in metal processing, he described a novel method that Nth Cycle has developed and modular system that it is deploying that can process five to six tonnes of materials daily.

Other speakers from Tennessee included: