A company with strong ties to an initiative championed by David Millhorn, the late University of Tennessee (UT) visionary research leader, won the “Traction Award,” sponsored by Verizon, at Tuesday’s “Startup Day” event that was part of “Innov865 Week.” 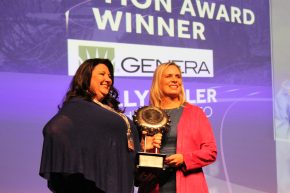 Genera Energy Inc., a manufacturer of non-wood agricultural pulp and molded fiber products, captured the recognition nearly 15 years after the State of Tennessee committed $70 million to the UT Biofuels Initiative to lead the effort to transition to an advanced biofuels economy. The immediate goal of the initiative was to demonstrate the feasibility of converting what was envisioned to be thousands of acres of homegrown switchgrass into cellulosic ethanol by building a pilot-scale research and demonstration cellulosic ethanol biorefinery, which would utilize the switchgrass.

Like many start-up initiatives, there have been pivots along the way, and that was certainly true for Genera which is based in Vonore, a small community in Monroe County. Located in the Niles Ferry Industrial Park, Genera operates both its Fiber Products Mill and its Biomass Innovation Park research campus.

The ”Traction Award” recognizes those ups and downs and more recent successes including: