(EDITOR’S NOTE: This is a roundup of business news from throughout the Knoxville region. If you have some business news that you would like to be included in Teknovation Weekend, please email us at news@teknovation.biz.) 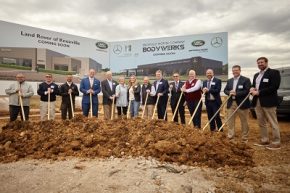 At the end of March, Furrow Automotive broke ground on a new campus in West Knoxville. The 43,000-square-foot project will include a full-service collision center and an expanded Land Rover location. It will add 40 new jobs to Knoxville. The Knoxville Motor Company BodyWerks is set to open in early 2023. The Land Rover space will be next door and will be more than double the size of the previous location.

“The trust our customers have placed in our family of companies and the resulting growth has allowed us to add these significant expansions to our service,” said Lee Ann Furrow Tolsma, President of Furrow Automotive. “We hope our customers will enjoy the thoughtful details and upgrades that we have designed with them in mind.”

More details can be found in this news release (Knoxville Motor Co Release).

The Andrew Johnson building is once again slated to be a hotel, according to a new article from Inside of Knoxville. Planning for the building, which houses administrative offices for Knox County Schools, has gone through a few rounds of changes due to the pandemic. In 2017, when it was originally purchased, plans for a hotel were put in place. Knox County Schools struggled to find a new location and didn’t begin the moving process until last summer. Also, during the pandemic, hotel financing was nearly impossible. Instead, the developers planned to make the building fully apartments. Now, the plan is to put 169 hotel rooms in the building, a majority of which will be used for extended-stay guests and will have small kitchenettes. Read more here.

The Knoxville Area Association of Realtors released the March edition of its monthly newsletter “Market Pulse,” this week. In last week’s edition of Teknovation Weekend, we covered the organization’s “State of Housing” report which gave an overview of housing in the area. Read that article here.

Millennials make up the largest share of home buyers nationally, according to the National Association of Realtors. In Knoxville, the occupancy rate dropped to 98.6 percent in February but remains slightly above the national average in the rental market.

The Small Business Administration (SBA) announced earlier this week that it has increased the number of industries that are eligible for the “Women-Owned Small Business Federal Contracting Program” by 70 percent. The list was updated after a recent study that analyzed gaps for women-owned businesses, according to a release from the SBA. The study is done every five years. The number of eligible industries jumped from 444 to 759, effective immediately. A list of the industries can be found here.