(EDITOR’S NOTE: This is the first of two articles spotlighting participants in the recently concluded inaugural cohort of the “Techstars Industries of the Future Accelerator” that will continue to have a presence in the region going forward.)

As Abhishek (Abhi) Sastri took the stage as the final presenter in the late May “Demo Day” for the “Techstars Industries of the Future Accelerator,” we thought that selecting the high energy resident of Tampa to close out the event was perfect positioning. His enthusiasm for the 13-week experience and the community was clearly evident as was the message that he delivered.

“We will design and assemble our Turbulent Liquid Cooling devices here through a partnership with TGS Precision and for early customers such as Advanced Computers, and initiate data center pilots,” Sastri told the attendees. It was the sort of outcome – several of the start-ups attracted to the program would decide to remain here – that many ecosystem builders hoped would come when Oak Ridge National Laboratory, the Tennessee Valley Authority, and the University of Tennessee System announced nearly a year earlier that they would jointly sponsor three cohorts for the program focused on “deep tech” start-ups.

Sastri’s company is named FLUIX Inc., and its focus is on making liquid coolers that increase performance of high-end computers. The start-up has a patent pending technology that eliminates overheating so that the performance and speed can be increased. Sastri says his technology is up to 25 percent faster than standard cooling hardware.

After graduating from Atlantic Community High School in Delray Beach, FL, he enrolled at the University of Central Florida where Sastri says he was expected to become an engineer or a physician. His grades early on were not what they needed to be and he lost all of his scholarships, but the enterprising entrepreneur says he refused to ask for help from his parents. 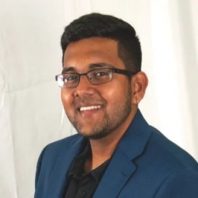 “I resorted (instead) to what I knew . . . building computers and technology,” Sastri (pictured here) explained. He started buying used electronics and flipped them, making money to help pay for college. That included building and selling computers used for crypto mining, gaming, and engineering design.

“That is where I realized something,” he explained. “There was a huge opportunity in cryptocurrency mining but they had this heat issue.”

Since Sastri was majoring in engineering, albeit aerospace, aeronautical and astronautical, he decided to seek help from faculty members in the college. “I knocked on the doors of 50 professors, and had 49 uninterested in helping,” he says. “The final one was in optics, and he also said ‘no,’ but introduced me to a Ph.D. student who was willing to help with the early designing and prototyping of our product during the off hours outside of school.”

Throughout his quest, Sastri never lost sight of his goal which was developing a way to lower the temperatures in computers to allow higher performance.

After graduating with his B.S. degree in 2020, he was asked by a manufacturer to create a cooling unit that could be installed in high-performance desktops. He also began entering and winning some start-up pitch competitions, filed for patents, applied without success to three Techstars programs, and even worked for 22 days for a defense contractor to earn enough money to further invest in FLUIX.

Like so many entrepreneurs, pitch events were important. Sastri was quoted in an article in Orlando Inno as saying he remembers at least 14 programs and events his company has participated in since its founding in 2017. They include the “Orlando Science Center Otronicon O-Tech Showcase,” “Rollins College Venture Plan Competition,” Orlando-based accelerator VentureScaleUp, and the University of Central Florida Business Incubation Program.

That persistence and progress convinced him it was time to do something bold.

“I decided that if we were going to go big, we’ve got to do it now,” Sastri said of his decision to apply for the “Heritage Group Accelerator Powered by Techstars” in Indianapolis. “I did not get in but got referred to Tricia (Martinez, Managing Director of the new Knoxville program). She believed in us.”

So, how was the experience of finally being in a Techstars accelerator?

“I got out of the weeds and on to the national stage,” Sastri says. “It got me out of the Florida swamp. It got FLUIX known, and it got me a supply chain.” The latter point is so typical of what people who relocate to the region frequently learn about the community.

His intern took him to church where another member of the congregation introduced him to Bryan Schmidt, President of TGS Precision that is located in Lenoir City. “Bryan said he could beat the prices of quotes I had received from companies in China and South America,” Sastri said, and he did, reducing the bill of materials by a significant margin.

So, the Tampa resident whose company is headquartered in Orlando will now assemble its cooling devices in the region. As important as having a new start-up here is the fact that the community has gained another evangelist.

“East Tennesseans are so easy to work with,” Sastri says.