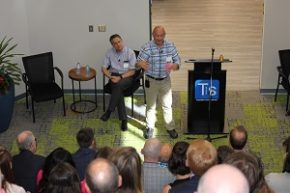 Held at the Ts117 Modern CoWorking facility in Oak Ridge that we recently featured in this teknovation.biz article, the event drew a good crowd for networking ahead of the program that featured Claus Daniel (seated in picture at left), Director of Sustainable Transportation at Oak Ridge National Laboratory (ORNL), and Bill Malkes (standing), Co-Founder of GRIDSMART Technologies Inc. The Knoxville-based company was recently acquired by Cubic Corporation for about $87 million. 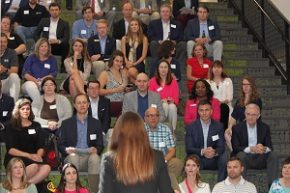 The “After Hours” program was held in the centerpiece for Ts117, the stair-stepped amphitheater named for Albert Einstein. The area adjacent to the amphitheater is anchored by a large mural of the world-renowned scientist on loan from the American Museum of Science and Energy. Ryan Chinn, one of the two brothers behind Ts117, is featured in this photo next to Darrell Akins. 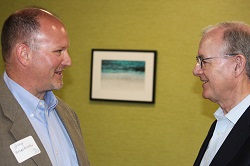 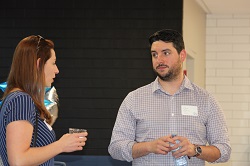