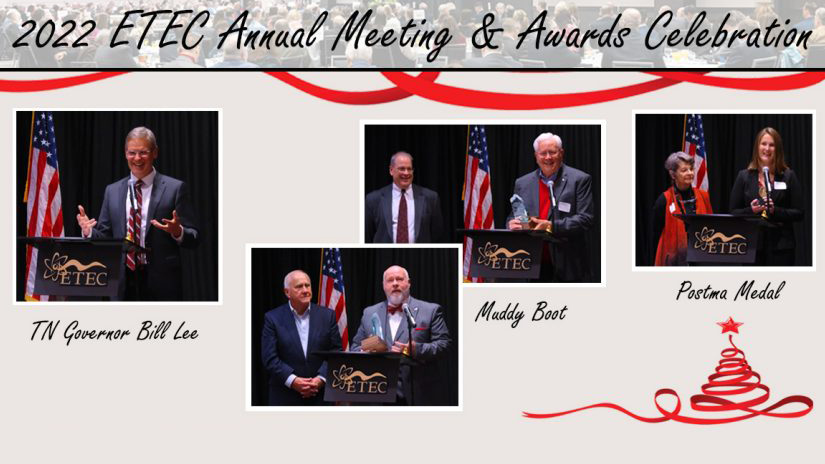 The East Tennessee Economic Council ended the year with prestigious awards and a special visit from the governor.

Three recognitions, including two presentations of the prestigious “Muddy Boot Award,” and a speech by Governor Bill Lee highlighted the annual meeting of the East Tennessee Economic Council (ETEC).

Held on Thursday morning in the banquet facilities at the Hilton Knoxville Airport hotel, the event drew close to 400 people who heard the Governor talk about the importance of economic development initiatives that change the lives and livelihoods of Tennesseans.

“That’s what a prosperous economic environment does,” Governor Lee said. “I’m excited about where we are (as a state) to lead this nation in so many ways. We are well positioned but we can’t be lazy.”

Noting that Tennessee “has all of the assets” . . . from quality of life to low taxes, he cited a number of areas where the state can play a national leadership role with energy and electric vehicles (EVs) being the first two named.

Tennessee will soon be home to a fourth original equipment manufacturer of EVs when Ford’s BlueOval City joins Volkswagen in Chattanooga, Nissan in Smyrna, and General Motors in Spring Hill.

Regarding Ford’s decision to build its first truly greenfield plant in 50 years in the Volunteer State, Governor Lee said he learned in those discussions just how important workforce was to the decision.

“We are doubling down on our strategy to produce workers,” he said, talking about the full continuum from those who earn a certificate in an area to individuals with two-year, four-year and graduate degrees.

He added to the foundation that will continue the state’s economic development successes with several other important areas.

“We’re investing not only in workforce but also in infrastructure,” the Governor said, mentioning water, wastewater, broadband, roads, bridges, and highways.

At the conclusion of his presentation, ETEC honored three individuals. Two were awarded the “Muddy Boot” which recognizes individuals who have helped build the community’s economic base. This year’s recipients were:

ETEC’s “Postma Young Professional Medal” was presented to Katie Roberts, Deputy Director of Y-12 Production Operations for Consolidated Nuclear Nuclear Security LLC, managing contractor for the Y-12 National Security Complex. The award, named for former ORNL Director Herman Postma, honors the accomplishments of young professionals who have made an impact and fostered a community culture in our region.