This week’s “News & Notes” feature includes a graduation for the Sky City Entrepreneur Center in Maryville, developments for two members of the “Innovation Crossroads” family, and plans from the East Tennessee Development District (ETDD) and its partners to advance some of their priorities that were part of its “Build Back Better Challenge” (BBBC) proposal. 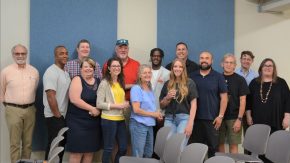 The Sky City Entrepreneur Center graduated its first class in the CO.STARTERS program earlier this month. The group (pictured here) included 13 owners representing 12 different businesses (one was a partnership) who completed 10 weeks of business planning. State Farm provided funding to defray the costs of materials. Volunteer facilitators were Jeremy LaDuke and Marcus Blair, and the mentors were Greg Rowe, Cliff Caudill and Saralyn Banks.

Separately, Sky City announced that its monthly “Side Hustle Happy Hour” is May 19, starting at 6 p.m. at Tri-Hop Brewery in Maryville.

The Nashville Entrepreneur Center has announced that it is accepting applications through June 13 for its annual “NEXT Awards + Entrepreneurs’ Hall of Fame.”

Presented by Amazon, the event celebrates exceptional entrepreneurs transforming their industries, creating opportunities, growing economies, and improving lives in Nashville and beyond. Award categories include both “Emerging” and “Market Movers” in: (1) products, services and retail; (2) technology; (3) healthcare; (4) music, sports and entertainment; and (5) real estate, construction and hospitality.

Applicants who have up to $1 million in revenue and have been in business no more than two years will automatically be considered for “Start-up of the Year.” Click here to apply.

From Nashville but with Statewide Interest: