One had been in business about seven years, the other 21 years when they both experienced significant transitions that the two key players described during Thursday evening’s “Innov865 Investor Series” forum.

The event, powered by Three Roots Capital, featured Terry Edwards, Founder and now Chair of the Board of PerfectServe Inc., and Brandon Bruce, Co-Founder and former Chief Operating Officer of Cirrus Insight. During a nearly 60-minute conversation that I had the privilege of moderating, the two Knoxvillians provided very useful insights in how they grew and ultimately sold their companies. Pictured below are yours truly (left) along with the two panelists – Bruce (middle) and Edwards (right). 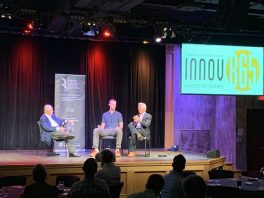 Bruce co-founded Cirrus Insight in late 2011 with college classmate Ryan Huff, and the two exited earlier this year after the integrator of Salesforce with Gmail received a significant growth equity investment from Clovis Point Capital LLC nearly a year ago. Edwards founded PerfectServe in 1997 and relinquished the title of Chief Executive Officer recently after K1 Investment Management LLC acquired the company in September 2017. The company provides real-time clinical communication and care coordination.

As noted in this recent teknovation.biz article, these exits were two of seven that have occurred in the last couple of years in Knoxville’s technology community.

“He (Huff) and I always wanted to start a business together,” Bruce said. “We never figured it out in college. We built websites together. Ryan called me up and mentioned Salesforce . . .  said it great for managing customers, but no connection between Salesforce and Gmail.”

In Edwards case, he reflected on 1997 when he was ready to make a career change and came to Knoxville to start a local office of VoiceTel. “It was essentially using voice mail the way we use texting today,” he said, adding that his wife was taking calls for a doctor. “I saw the “hassle,” Edwards told the audience. While he thought there would be a way to use VoiceTel’s technology to address the need, Edwards could not get VoiceTel’s interest, so he started PerfectServe.

For the roundtable discussion, we were particularly interested in learning more about their respective journeys from launch to exit. Ironically, both thought they had solid exit deals several years ago only to learn they did not at the 11th hour. In the case of Cirrus Insight, it was about 18 months into the start-up’s life, while the opportunity for PerfectServe occurred in 2014.

How did they deal with the failed deals? “When it did not occur, Ryan and I put our heads down and kept working, unsure of what direction it (the next opportunity) would take,” Bruce explained. In the case of Edwards, it was a little more complicated because the acquirer had a complementary technology to PerfectServe’s product, and combining the two provided a significant market opportunity.

When the deal fell through, Edwards said that he took a few months to consider the best options for the company and concluded there were two: either selling PerfectServe for the best possible price or securing substantial additional financing to build the complementary product that the acquirer provided. That would result in a much more attractive acquisition target for someone.

“The only solution for PerfectServe going forward was a whole market solution,” he explained. His Board approved that option, and the PerfectServe team executed on plan. “It took a year longer than we expected,” Edwards added.

In response to one of our questions about exiting an enterprise you have launched, PerfectServe’s Founder reminded the audience that, “As soon as you bring in a dollar of investment from someone else, it’s no longer your baby or your company.” He had earlier struck a similar theme, noting that, “When you bring in venture capital, you are going to have an exit.”

Both emphasized the critical importance of securing a good return for the investors or shareholders,

“You run a process” to do that, Bruce said, adding that “deal certainty” is important, something both did not experience in their aborted 11th hour exits. He also noted the difference in the views of venture capital and private equity. Bruce said growth is very important to the former, while items like operational efficiency, margins, EBITA (Earnings Before Interest Taxes and Amortization), and profitability are ranked highly for private equity.

Noting that his Co-Founder was based in California, Bruce described an 18-month process that led the two of them to eventually decide it was time to exit. “We talked eight to 10 hours a day,” he said, so much so that his then two-year old daughter would walk around the house with a pretend phone. When he asked her what she was doing, she responded, “Talking to Ryan.”