An inquisitive crowd turned-out Monday night for the kick-off of the third annual “AgLaunch Bootcamp” co-sponsored by Memphis-based AgLaunch and the Knoxville Entrepreneur Center.

Hosted by Blühen Botanicals at its new retail location in Knoxville’s Old City, the event was the first unveiling of the four start-ups that are participating in the third edition of the week-long mini-accelerator. They are: 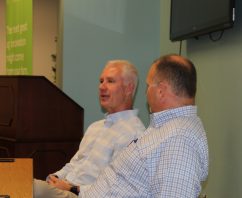 The 2019 edition of “AgLaunch Bootcamp” wraps-up with a luncheon Friday keynoted by Karen LeVert, Co-Founder and Chief Executive Officer of Ag TechInventures, and pitches by the four participants. Those interested in attending can register here. 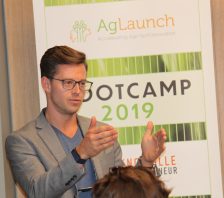 During Monday evening’s kick-off, Joe Fox, Co-Founder and Chief Executive Officer of Blühen Botanicals, and three of his colleagues answered a plethora of questions about the rapidly growing start-up that was founded less than a year ago. We spotlighted Fox in this recent teknovation.biz series (Part 1, Part 2 and Part 3).

“We’re all learning together,” Fox told the attendees about the hemp industry. “There is no playbook; we’re writing the playbook.”

That theme of continual learning was repeated numerous times by the Blühen Botanicals team.

Since its founding in 2018, the company has grown to about 55 employees and recently announced a $30.6 million investment from SOL Global Investments Corporation that will further propel its growth.

That rapid expansion has not come without some challenges that the start-up with a flat organizational structure has faced. One of the biggest ones cited was communications – making sure everyone in the organization was aware of decisions that were being made. Others included accountability, focus, priority setting, and knowing which colleagues you can lean on for various things.

Obviously, hemp is an agricultural product that Blühen Botanicals is using for a variety of products including the hemp-infused beer and food that it served at Monday night’s event.

“Like tobacco, hemp can make a small farm big,” Don Fowlkes, Chief Agronomist at Blühen Botanicals, said as he explained that tobacco farmers have the type of soil, equipment and access to and experience in managing labor.

The interest by farmers has been significant with Fox noting that the company has signed agreements for all of the hemp that it needs for 2019 and 2020.

In the photo below from Tuesday morning’s opening session at the University of Tennessee Research Foundation’s Business Incubator, AgLaunch’s Schuyler Dalton (left) is pictured with the four participating entrepreneurs are (left to right): DeeAnn Dean, Halter, Anderson and Hamilton. 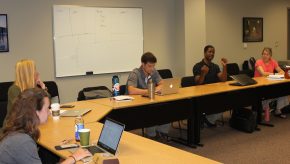