The COVID-19 pandemic impacted the economy. Everyone saw that in some way. But how can economics help model future epidemics?

That was the subject of a lecture from a visiting professor Thursday at the Howard H. Baker Jr. Center for Public Policy on the University of Tennessee (UT), Knoxville campus.

Jude Bayham is an Associate Professor in the Department of Agricultural and Resource Economics at Colorado State University and in the Department of Epidemiology at the Colorado School of Public Health. He is an environmental and resource economist who works at the intersection of the environment, human health, and policy. Bayham has served on the Colorado Governor’s COVID-19 Modeling Team since April 2020.

Bayham’s research looks at the human behavioral response to illnesses, namely the choice and ability of people to avoid contracting a given virus by increasing time at home and away from others, also called avoidance behavior. 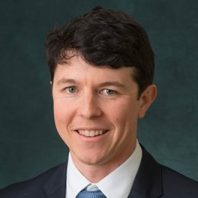 As a postdoctoral fellow, Bayham looked at pre- and post-pandemic health epidemics to study how this theory of avoidance behavior holds up in real-time and can be applied to help in future cases.

He did this by looking at simulated models of general disease spread, as well as detailed breakdowns of how people spent their days before and during epidemics. Bayham said simulation models have to have parameters that can be applied to data to estimate outcomes.

His theory that avoidance behavior impacts disease transmission was confirmed when looking at cases of swine flu during the 2009 outbreak. Bayham’s research showed that people with avoidance behaviors had fewer positive cases. He said the findings show people in this instance did change their behavior to avoid the risk of infection of swine flu, and that outbreak would have been worse if they had not.

Bayham next examined if people avoided outdoor recreation to avoid Lyme disease in the early 2000s, and what was the economic impact of that decision. His team found that people spent about half as much time outside, or traveling to an outdoor destination, as they did before Lyme disease became prevalent.

They estimated a $2-5 billion economic value of lost recreation in that instance. This isn’t saying Lyme disease fear caused people to spend less money. Bayham said these are values not captured in our accounts, but time and possible spending.

Bayham then applied these findings to the COVID-19 pandemic, looking at how voluntary and mandatory stay-at-home actions impacted disease transmission. He learned that both policy and people’s aversion to risk lead to avoidance, which reduces transmission. Bayham also found accurate attribution of behavioral response to policy is important for benefit-cost analysis.

Bayham said the main finding of all this research is that you can’t have a functional economy when people see a high risk of infection. That risk increases the cost of public interaction, meaning people will avoid contact to keep from getting sick. Policy can encourage avoidance behavior, and knowing how fear plays in makes a difference, too.

The Baker Center worked with UT’s One Health Initiative to hold this lecture as part of its Energy and Environment Forum and part of the World One Health Day celebration.

For more public lectures at the Baker Center, you can view the events calendar here.