After experiencing and overcoming health issues, Raven Hernandez – a  passionate environmentalist and Lipscomb University graduate – decided to do something to tackle poor air quality.

The result is Earth Rides, an all-electric rideshare start-up that officially launched last October 1 in Music City following a two-month Beta test. On Monday, Hernandez and Earth Rides land in another music and entrepreneurial hotspot – Austin, Texas – with plans to expand to at least two more cities by the end of 2021 and to be in a majority of metropolitan areas within five years.

After that, Hernandez expects to add medium-sized cities and achieve her goal of establishing a presence in her family’s native country, Panama.

By now you are probably wondering what makes Earth Rides different from other ride-share services. It begins with the vehicles that are used. The company’s entire fleet comprises electric vehicles (EVs). 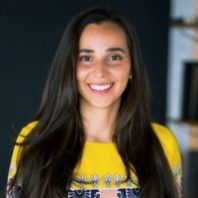 “We own the entire fleet, and they are mostly Teslas,” said Hernandez, the company’s Founder and Chief Executive Officer. That fleet mix, both in terms of brand and ownership, will change as she expands the business and establishes relationships with other original equipment manufacturers (OEMs).

It is significant that the company launched in Tennessee, which ranks first in the Southeast for EV production and has a stated goal of being the country’s leader for EV production and the related supply chain. It helps that three of the major automakers that have publicized goals to increase EV production – General Motors, Nissan and Volkswagen – have manufacturing facilities in the Volunteer State that are currently or planning to manufacture EVs.

“People choose us because it’s cool, and because we offer a premium service,” Hernandez explains. Since its launch last October, Hernandez says Earth Rides has served 45,000 riders and revenue in Quarter 2 vs. Quarter 1 of this year grew more than 170 percent.

To fuel the company’s growth plans, it has launched a Wefunder campaign with a goal of raising $1 million. To date, it has raised more than $758,000, and a number of those investors are customers, underscoring the emphasis placed on customer service.

“Riders say they want to invest in us, and Wefunder offers the vehicle to do so,” Hernandez said. Some of the funding will be used to purchase additional vehicles for the fleet, but Earth Rides is also modifying its business model in a couple of respects.

Up until now, all of the drivers have been employees of the parent company who use company-owned EVs.

“We’re focused on taking care of the drivers, so they take care of the riders,” Hernandez says.

Expansion will allow Earth Rides to engage with drivers who own their own EVs and work as independent contractors, while adhering to the company’s rigid standards for quality and customer service.

So, how did a person who grew-up in Antioch, an unincorporated community in Metropolitan Nashville/Davidson County, decide to start a ridesharing company? Hernandez says she moved to California after graduating from Lipscomb to attend Pepperdine University’s Caruso School of Law.

“I saw law school as a vehicle to financial freedom and generational wealth, but decided I did not want to practice law,” she says. However, living in the Los Angeles area exposed her to the pollution challenges that the state, nation and world face. “I’m super passionate about health, but I saw others were not. I asked myself how I can make others more conscious about reducing carbon emissions?”

The answer was Earth Rides. Hernandez says she was instantly impassioned by the idea and gave up her legal career to return home to launch the company. Already it’s been a wild and wildly successful ride, she says. It also gives her hope not only that she can make a real difference in reducing carbon emissions, but that she can help educate others about the real impacts they can make themselves, first in her hometown of Nashville and soon in other cities and nations across the globe.