Located in the Bearden Technology Suites Building at 342 Troy Circle off Baum Drive, the 4,000 square foot facility is the brainchild of Blake Bookstaff and Frank Ramey. The former is a local businessman with many interests including owner of the building, while Ramey is the Founder of several companies in the digital marketing and branding space.

“Frank and I have known each other a long time,” Bookstaff told us when we toured the space in early December ahead of a formal open house a week before Christmas (see building entrance photo at right and other photos below). The space officially opened on December 2 with eight private offices, two conference rooms seating six and 10 people respectively, and “The Hub,” as the co-working part is known. It can accommodate eight desks.

There’s also the required kitchen and break area along with another space called “The Library.” It includes three work stations and a couple of comfortable chairs along with a modest library containing hardback business books. Like the traditional facility from which it gets its name, this space is intended to be devoid of conversations and other noises such as headphones playing music.

The two Co-Founders are both graduates of the University of Tennessee, Knoxville as well as local high schools. In CoWorking Knoxville, they are focused on building a strong community that becomes a self-replicating business machine.

“We started talking about the idea about two years ago,” Ramey said. Bookstaff bought the building in April and has invested a significant amount of money in renovations like new floor coverings and doors with digital keypads.

“We are going after tech companies,” he says. That makes sense; Bookstaff is the holder of about two dozen patents. They define tech entrepreneurs as “having a scalable, tech-based business.”

CoWorking Knoxville’s eight private offices are equipped with sit and stand desks, two side chairs, and a wall-mounted clear dry erase board. The offices start at $850 a month which includes membership in the CoWorking Knoxville community, 24/7 access to the facility, and 10 hours each month of use of the two conference rooms. While the private offices are designed for one person, an additional person can be added for $150 more per month.

There are five co-working options, ranging from a day pass that is $25 for the privilege of dropping-in to full membership for $299 a month. It includes an unlimited number of days, 24/7 access, full membership, and eight hours each month of use of the two conference rooms.

Most memberships include three monthly Proximity access passes which allows members when traveling to visit a network of 450 other co-working facilities nationwide.

The various options and benefits in each category can be found here.

Pictured here are (in order): Frank Ramey (center), CoWorking Knoxville Co-Founder, in “The Hub” talking with Oak Ridge National Laboratory’s Jesse Smith (left) and local entrepreneur Will Overstreet; Cliff Caudill (left), Chair of the Knoxville SCORE Chapter, with Blake Bookstaff, the other Co-Founder; one of the private offices; and the break area. 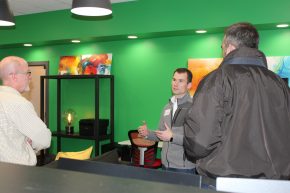 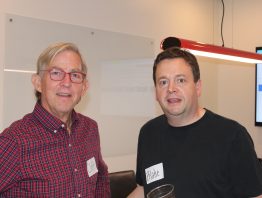 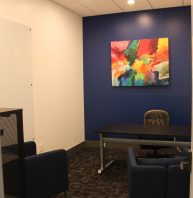 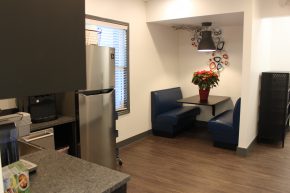