JUST IN: Lia Winter and her Winter Innovations team captured another pitch event. This time it was the University of Georgia’s (UGA) annual “Next Top Entrepreneur” competition held last night in Athens.

That makes it three in a row for the soon-to-graduate University of Tennessee student with two Master’s degrees. She won $15,000 at the annual “Brown-Forman Cardinal Challenge” hosted by the University of Louisville and $21,500 in the annual “Stu Clark Investment Competition” at the University of Manitoba in Winnipeg. By capturing the UGA competition, Winter added another $10,000 in prize money as she and the team work on the EasyWhip device used for orthopedic reconstruction procedures like ACL (anterior cruciate ligament) surgery.

Pictured here are Winter (left) and Preston Dishner, a fellow graduate student and Director of Operations, with the ceremonial check. 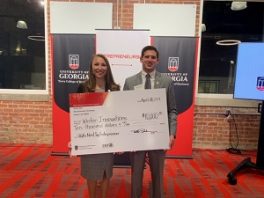