(EDITOR’S NOTE: About 48 hours ago, we posted our holiday message on teknovation.biz with this special note: “Barring something happening between now and 2018 that warrants a special posting, we will resume our normal schedule in early January.” We’ve never had such an occasion in nearly six years and little did we expect one this year, much less the reason for the following tribute to a leader in our community and a friend.)

David Millhorn frequently said something to the effect that, “If you’re going to think, think big.” It was a philosophy that he espoused daily and a way of life that he lived and breathed up until the final moment.

The University of Tennessee’s (UT) Senior Vice President Emeritus died suddenly on December 18. While his health had been deteriorating, his death was totally unexpected. In fact, less than two weeks ago when we last saw him at the annual meeting of the East Tennessee Economic Council (ETEC), David was excited as he talked about the giants with whom he had run during his careers at the University of North Carolina, the University of Cincinnati (UC), and UT.

David was a giant in his own right, a Tennessee native who devoted more than a decade to helping advance the research, outreach, and economic development agendas at UT and Oak Ridge National Laboratory (ORNL). David came to UT in 2005, already a distinguished scientist, having served as the Inaugural Director of UC’s Genome Research Institute and Chair of its Department of Genome Science.

I had retired the previous year from UT, but I met David early on during my second career at ORNL and quickly drew a few conclusions about him. He was a visionary, focused on big ideas. David understood the significant potential that came from UT’s role with Battelle in managing ORNL, and he made sure that UT leveraged every opportunity. That was, in fact, the role he was playing when he died, tirelessly working to make both institutions better. He was not a politician, but he understood the political process. David had strongly held opinions on many topics, but he was also a good scientist who was willing to change his mind if presented solid facts. He was a good listener, even though many people thought he was not paying attention. Above all else, David was an individual who wanted to make a significant difference and, if that meant asking forgiveness later rather than permission now, he would take the former route.

David became a friend, someone with whom I chatted on numerous occasions about a variety of topics. We last talked on December 8 when the two of us, along with three other individuals, were named as recipients of ETEC’s “Muddy Boot Award.” You could tell that the honor meant a great deal to him; David was known as a man of few words, but he took the occasion to share highlights from his distinguished career with the jam-packed room. Little did any of us realize that was probably his last public speech.

When word spread Tuesday morning about his sudden death, many people talked with me about their thoughts about and interactions with David. Perhaps the best characterization came from Ed Pershing, Co-Founder and Chief Executive Officer of PYA, who had numerous conversations with David over the years. “David was a force,” Ed said. “Our region needs more people like David. He will be greatly missed.”

Each of us should hope to leave a mark during our brief time on earth. Without a doubt, UT, ORNL and the Knoxville-Oak Ridge region have greatly benefitted from David’s time here. His contributions will be felt for years to come.

A memorial service is set for 1:30 p.m. EST tomorrow (December 21) at Church Street United Methodist Church in Knoxville. The family will receive friends after the service. 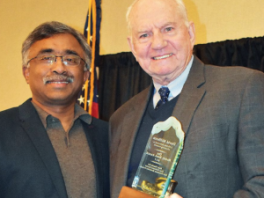