One of the events during day two of “Startup Week Chattanooga” was a pre-recorded, YouTube-delivered introduction of the participants in the third iteration of the “Consumer Goods Accelerator.” 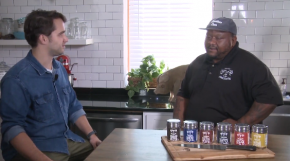 Offered by CO.LAB and Proof, this year’s programming was designed to help food and beverage enterprises that have been adversely impacted by COVID-19. Yesterday afternoon’s session featured a conversation with Tim Moore, Program and Communications Manager at CO.LAB, and each of the Founders of the start-ups. He is pictured here with Brandon Ellis of Chatter Box Cafe.

The participants, in order of presentation yesterday, were: