The event begins October 18 and ends October 22, but there’s a lot of work involved over the next several months.

“I’m asking everyone who is invested in our city to join us in reigniting its entrepreneurial spirit and championing the ongoing innovation here,” Cox said at a Wednesday news conference. “The past year and a half brought a lot of challenges, but after the period of forced deceleration, we are well positioned to reimagine, re-engage and reignite the momentum our city and its residents thrive on.” 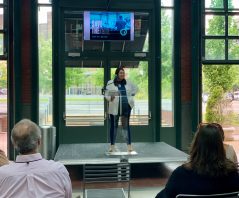 Joined by a hand-selected group of volunteer supporters who comprise the “Startup Week” Committee, Cox also unveiled the week’s new branding. Local creative agency Tiny Giant revamped the logo, which had not been updated since “Startup Week’s” inception in 2014. Additionally, Cox also said that submissions are now open to anyone who wants to organize an event for the multi-day entrepreneurial celebration.

CO.LAB’s team serves as stewards of “Startup Week,” but the majority of the events are imagined and organized by local individuals, organizations or companies. Although the series of events are a celebration of all things entrepreneurial, the overall energy is collaborative with a variety of events that anyone can enjoy. In the past there have been mixers, panel discussions, fireside chats, silent discos, networking events, keynote speakers, cocktail parties, yoga classes, live music.

“If you could combine a carnival, business convention, and a Chattanooga festival . . . Well, that’s ‘Startup Week CHA,’” said Nicole Coleman, Innovation District Events & Marketing Manager for The Enterprise Center, said. This year, CO.LAB is asking organizers to embrace delight on Friday with a special focus on fun, community-friendly events that appeal to anyone, whether they are into start-up companies and entrepreneurship.

CO.LAB is also looking for sponsors, and those interested can email Cox (Lindsey@Colab.is). In addition, the non-profit provided this “Fast Facts” document (Startup Week Fast Facts) that includes a list of the above referenced committee.