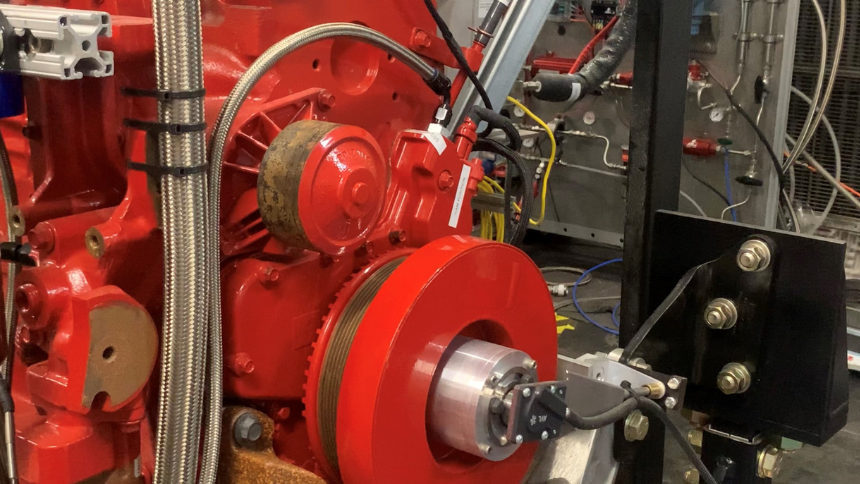 Check out these projects at the National Transportation Research Center

Transportation over land, underwater, in the sky, and out of this world is being enhanced one project at a time at the National Transportation Research Center in Knoxville.

A lot of the nation’s leading research in both transportation and additive manufacturing sits right off the Hardin Valley exit of Pellissippi Parkway in Knoxville.

Part of Oak Ridge National Laboratory (ORNL), the campus that holds the Manufacturing Demonstration Facility (MDF) and the National Transportation Research Center (NTRC) is pushing the envelope in a lot of research disciplines, expanding ORNL’s physical reach outside the City of Oak Ridge.

When it comes to transportation research, the NTRC is known best for its engine work.

But Szybist said as the Department of Defense has pivoted to electrifying those on-road engines, his team at the NTRC is now moving off-road.

“They’ve shifted our expertise in the combustion and engine space to what they call the hard-to-electrify parts of the transportation sector. That’s the rail, off-road, marine, and some thoughts in aviation, although we’re still trying to find our footing in the aviation space,” said Szybist. Off-road here refers to large machinery vehicles used in agriculture, construction, or mining.

So Szybist gave us a quick tour of the NTRC and highlighted three major projects that researchers are working on now.

“Ammonia is a toxic fuel. It’s not easy to handle. But it doesn’t have any carbon in it, so there’s no carbon in the emissions,” said Szybist. “It can be made from renewable sources, from renewable hydrogen, and so it’s something that’s of great interest, especially for the long ocean haul vessels for container ships, tanker ships, those sorts of things.”

Researchers are using a previously installed engine at the NTRC to investigate the use of ammonia as a fuel for smaller applications, which Szybist said is a bigger challenge.

“Two challenges associated with ammonia are that it’s very hard to ignite, it doesn’t burn particularly well and has a very slow flame speed, and one of the pollutants that it can make, N2O, is itself a potent greenhouse gas emission,” said Szybist. “So there’s a lot to figure out when it comes to how to use ammonia as a fuel, making sure that we can get efficient combustion, making sure that we’re not making the problems worse by creating emissions from those engines.”

You probably won’t ever fill up a speed boat with ammonia at a dock-side gas station given its toxicity, but the impact for commercial boats like ferries and container ships could make a big difference in cutting carbon emissions.

Deepening the NTRC’s footprint into maritime engine research is another engine-related project, this time in partnership with ExxonMobil.

“The types of engines that are on these massive container ships that take cargo across oceans from continent to continent have a unique engine design,” said Szybist. “They actually have two different lubricating systems, one for the combustion part of the engine and another for the crank train. These engines are very difficult to do experimental work because they’re so massive and it’s really expensive to do that work.”

Szybist said a person can stand inside one of the cylinders of a full-size engine. In order to make research more feasible, ORNL and ExxonMobil commissioned a 1/10 scale of one cylinder of this large engine. Even then, it’s the tallest engine inside the NTRC.

Research on this smaller cylinder is focused on the amount of sulfur in the types of fuels needed to power these engines.

“The fuels that they use are called bunker fuels,” said Szybist. “It’s solid at room temperature, so you need to heat it up to be able to get it to flow. It’s a very high-sulfur fuel, it’s not very pleasant, and the world was looking to reduce the amount of sulfur in those fuels and they said, ‘we need to change the lubricant formulation to be able to accommodate different fuels  because the lubricant formulation and the fuel sort of evolved together over the years, how do we change that?'”

As researchers get closer to answering that question, they’re turning toward alternative fuel sources.

“What about biofuels? What about ammonia? Can we start to pivot some of the research on this platform toward those types of problems,” said Szybist. “So they’re looking  to get more into the decarbonization of fuels side of things.”

“A growing part of our portfolio is centered around carbon capture, and the idea of capturing carbon and then being able to either sequester it, lock it away for geological time periods, or to use it to make useful fuels or products or chemicals out of it,” said Szybist.

A common way to capture carbon through the point source method is to have a column where the exhaust flows up from the bottom and a carbon capture fluid flows down from the top.

“One of the problems with that is when the carbon dioxide is captured by the solution, it releases heat,” said Szybist. “And when it releases heat, the ability to capture more carbon dioxide goes down so it becomes less effective as it heats up. Within this project they’re looking to say, ‘can we do process intensification here? Can we add use our additive manufacturing, our 3D printing to actually print a heat exchanger into that column?'”

That’s what researchers are looking into at the NTRC, trying different configurations, formulations and solutions to make point source carbon capture more efficient.