At 127,000 square feet of office and manufacturing space, Hamilton County’s Business Development Center, officially known as the INCubator, is the largest in Tennessee and the third largest in the country.

It had been about four years since we visited the facility and, while the building has not changed, the mix of tenants has. Gone are start-ups like Branch Technology, the company with the patented 3D printing fabrication technology that allows what is says is “unprecedented design freedom,” and Variable Inc., the company that has spent a decade harnessing the world’s color libraries in easy-to-use, patented devices that pair with custom developed mobile apps on a user’s smartphone or tablet.

They, along with many others, have graduated to bigger spaces which is a great outcome for a business incubator and the community where it is located. In their place are start-ups like three that we visited briefly on our tour that was conducted by Bill Lupia, Director of Small Business and Entrepreneurship for the Chattanooga Area Chamber of Commerce. The latter organization manages INCubator for Hamilton County.

“Clients have to have a business plan and three years of financial projections to be considered as a tenant,” Lupia told us. “Then we look at their progress on the business plan after one year.” Rent is subsidized for those who are accepted.

The INCubator also houses two organizations that support small businesses – the Chattanooga office of the Tennessee Small Business Development Center and LAUNCH Chattanooga – and has a number of meeting and training rooms. Current occupancy is about 78 percent.

Since the former American Lava and later 3M building was acquired by the county and opened in 1988, 615 companies have graduated.

Lupia, who had been with the Chamber for 17 years, was named to his current position this past August. As we toured the massive building that has 21,000 square feet of office space and 85,000 square feet of manufacturing space, he easily and warmly interacted with the tenants, and they reacted in a similar manner. 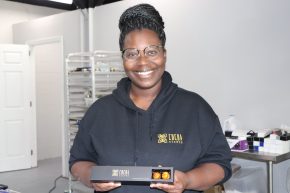 For Founder and Co-Owner Ella Livingston, the biggest challenge for her business that is a fairly new tenant of INCubator is “finding local places to partner with us constantly, not just during the holidays.” She was born in Ghana and moved to the U.S. when she was three years old. Cocoa Asante produces a variety of truffles made from cocoa beans imported from a farm her cousin manages in Ghana. We also learned that 65 percent of the world’s cocoa comes from the West Coast of Africa.

This has been Livingston’s first year operating year round, and she can be found at area markets as well as online. Prior to 2021, she only produced her truffles five weeks out of the year. Livingston has two long-term goals: (1) build a vertically integrated operation which she describes as “bean to box”; and (2) build a legacy for her daughter.

“INCubator has been a huge step in the process,” Livingston told us.

Carolyn Mueller was in the process of rebranding her graphic design firm when we visited. Launched in 2002 in New York City, she has won a number of awards and had her work displayed at venues such as Grand Central Station in the Big Apple, Union Station in Washington, DC, The Art Director’s Club in New York City, and MTV in Times Square. 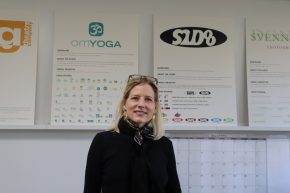 Mueller moved to the U.S. from Germany when she was 15 years old and joined INCubator in early 2020. The firm has local clients as well as a number in New York City which she has “always been a very good market.”

“INCubator has been an amazing opportunity,” Mueller said. There’s a neighboring company that does coding, and many of the business owners regularly interact with each other.

The word DAZU was not familiar to us. It’s a German word that means share the credit.

Founded in 2018 by Gideon Thomas, Serious Health provides care services for those who don’t have other options. Thomas was not at INCubator when we visited, but we met with Gabriel Dunn, Office Manager, who shared with us the Owner’s motivation.

“Her father-in-law, father and grandmother all got sick at the same time,” Dunn explained. “Finding care for them was not where she wanted it to be,” and Serious Health was launched. It currently serves eight individuals – five in what Dunn described as a family model where there is a nurse provided and three in something like a group home. Serious Health will be adding another group home soon.