Chattanooga’s Felicia Jackson, Founder of CPR Wrap Inc., captured the top prize in the eighth and final competition in the Nashville Entrepreneur Center’s “Pitch for Good” series Monday afternoon. By besting three other competitors who had won one of two tracks in previous editions of the “Pitch for Good” series, her company will be designated as the Tennessee Titan’s “Small Business Partner” for 2021. 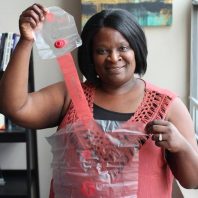 For the engaging Jackson, it was the latest in a series of competitions where she again described “almost losing my baby” in 2002 when she forgot how to administer CPR. Fortunately, her husband stepped-in, and the idea for CPR Wrap emerged. It has evolved over the years as she has worked to reduce the cost and make the product more competitive.

“My goal is to have a global product,” she told attendees and the judges.

Joining Jackson and CPR Wrap in the finals were:

In winning the finale, Jackson earned a package of media and hospitality rights to promote her business this year via the NFL. It includes suite access to two games, advertising on the Titans’ website and social media, and in-game promotions.

Two Knoxville start-ups were among 14 that were eligible for the finals. A panel of judges selected the four finalists from those that won either the “Launch” or “Up and Coming” categories in each of the previous seven “Pitch for Good” competitions that began in May.

Judges for Monday’s event were: (1) Adolpho Birch III, Senior Vice President, Business Affairs and Chief Legal Officer for the Tennessee Titans; (2) Van Tucker, President and Chief Executive Officer of Launch Tennessee; and (3) Marcus Whitney, well-known Nashville Entrepreneur who, among other roles, serves as a Founding Partner at Jumpstart Foundry and Co-Founder of the Nashville Soccer Club.