Brickyard’s business model differs from most incubators or accelerators

Five entrepreneurs who were very successful in growing and exiting Chattanooga-based start-ups are now paying it forward in a new venture with a slightly different business model than most incubators or accelerator programs.

The five include two Co-Founders of Bellhop – Knoxville native Cam Doody and Matt Patterson – and three Co-Founders of Access America Transport – Allan Davis, Barry Large, and Ted Alling. Together, they have created Brickyard, a name that symbolizes the hard work that the Operating Partners expect of the entrepreneurs that are selected for the program and an investment from Brickyard’s initial evergreen fund. 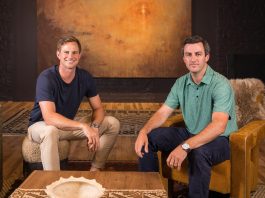 “When we started, we had no idea if it would resonate with top founders,” Doody (pictured here on the left with Patterson on the right) says. The answer came quickly over the last year when Brickyard issued 16 term sheets, and 15 were accepted (see list of portfolio companies here). The start-ups come from U.S. cities like Austin, Birmingham, Boston, Chicago, New York City and San Diego as well as countries like Canada, England and Malta. Six of Brickyard’s team are alums of Y-Combinator, the most prolific accelerator in the world.

“They are extremely diverse,” Doody says, explaining that “52 percent of our founders represent minorities.”

Today, those 15 are working out of a 14,000 square foot former warehouse at 917 East 16th Street just on the fringe of the trendy Southside area where most also live. The facility, which Doody says can accommodate up to 25 start-ups at a time, includes 100 desks, call boxes, breakout rooms, a large conference room, common area lounge, and workout spaces – a gym, sauna, steam room, cold plunge, and showers.

“We created a place for founders to evade noise and distraction without isolating themselves from other super high-ceiling founders,” he says. “All are pre-product market fit. Founders commit one or two years to working harder than they ever have.”

Several aspects of the Brickyard model contribute to its uniqueness. “We’re here every day,” Doody says of the five Operating Partners who are bringing their experience scaling businesses to the table. For example, Access America grew to 800 employees and sales of $600 million in 12 years before it was sold to Chicago-based Coyote Logistics in 2014.

“We don’t have formal programming, cohorts or a Demo Day,” Doody adds. “We don’t believe in prescriptive programming. There nothing prescriptive about discovering product/market fit.” Instead, what Brickyard is providing is all about the community . . . a facility, venture funding, an environment for collaboration with similar growth-focused entrepreneurs, and daily access to seasoned operators.

He adds that Brickyard’s North Star is not economic development per se. “It’s about creating an environment that improves the odds for founders.”

The five Operating Partners self-funded the initial evergreen fund, and $3 million has been deployed with the investment in the 15 companies averaging $150,000 each. In turn, the inaugural group of portfolio companies has raised another $40 million, and their combined valuation is approaching $200 million.

“We will be raising a $12 million second fund and plan to fill it entirely from local investors,” Doody says, explaining that “founders and capital create the entrepreneurial ecosystem we’re committed to building. You must have both.”

So, what type of start-ups attract the attention of Brickyard?

“We’re category agnostic, having invested in logistics, B2C (business-to-consumers) and B2B (business-to-business) marketplaces, SaaS (software-as-a-service), EdTech, artificial intelligence, consumer apps, and deep tech,” Doody tells us, adding, “We generally are not attracted to healthcare or hardware due to long sales and iteration cycles.”

We asked the individual who grew-up in Knoxville, graduated from Auburn, and relocated the Bellhops start-up to Chattanooga about the city’s greatest strength. “Our biggest advantage is our culture of welcoming outsiders,” Doody said. “People here aren’t threatened by outside perspectives. Instead, we crave them.”

To illustrate that point, he described an unorganized group that loves the city and has become the equivalent of a welcome wagon. “Someone sounds the alarm when an interesting person or group is coming to town, and people come out of the woodwork to show them around – business leaders, politicians past and present, city leaders, you name it. We have huge alignment and coordination.”

As far as the impact of Brickyard long-term, Doody says he and his partners plan to attract hundreds of founders and high-growth companies to the city over the next decade.