Eight entrepreneurial teams – most solopreneurs and one couple – participated in last Thursday’s “Brandcamp” hosted by the Knoxville Entrepreneur Center (KEC).

The all-day event was facilitated by the always energetic, animated and inspiring Chris McAdoo, KEC’s Director of Strategy and Engagement with support from others on the KEC team. About a dozen start-ups had registered but several cancelled at the last minute.

“Branding is promises made and promises kept,” McAdoo told the attendees in the portion of the program that we attended. “It’s putting your company’s values into action.” To do so, he emphasized the importance of brand pillars and actively engaged the attendees in an exercise to begin developing theirs. 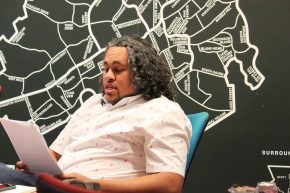 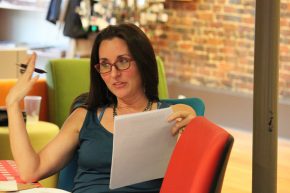 Among the attendees were: (1) Nick Sokol (pictured right), Founder of Algaeo, a start-up that participated in the recent “Cultivate Appalachia Bootcamp”; and (2) Susan Bennett Lopez (pictured left), Owner of LuckyGirl Eleven. Algaeo has thus far developed two algae culture starter kits that align with Sokol’s goal of growing algae as a way to “capture carbon and save the world.” LuckyGirl Eleven produces unique handbags, leather products and one-of-a-kind jewelry pieces that “have their own story to tell, a sense of mystery, an element of intrigue, which sets them apart from the masses.”

The program concluded with a panel discussion, again facilitated by McAdoo, involving four players in the local branding and marketing ecosystem. In alphabetical order by last name, those individuals were: 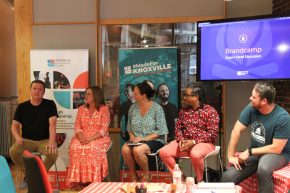 McAdoo’s first question for the panel focused on how they approach engagements with new clients.

“We want to know who they truly are and what they are trying to accomplish,” Easter said. “We’re not about putting a spin on it. We’re trying to put that visual to that brand.”

For Rawls, it’s a matter of understanding the target market . . . “who are we talking to and why are we talking to this person?” After that is known, he said that it is all about positioning . . . attracting, engaging, nurturing, and engaging.

Responding to McAdoo’s question about things that Founders frequently take for granted, Oldacre emphasized the importance of a brand guide. “You need to think of the brand as an end-to-end experience,” he said.

Rosenberg talked about the importance of being true to a company’s brand and its core values, citing Chick-fil-A as a great example. Explaining that she frequently wants something from the chain on Sunday when the stores are closed, Rosenberg noted all of the money that their franchisees are leaving on the table, but it is about being true to the corporation’s values.

In terms of selecting a marketing firm, Easter emphasized the importance of making sure the account executive and others on the team are in listening mode. “You need to make sure they hear you,” she said, adding, “A lot of it is the relationship.”

Rawls was clearly not a fan of too much reliance on social media. Instead, he advocated for greater usage of email campaigns. “You don’t have to sell them immediately; you can just love on them,” he said.

Later, as McAdoo asked for any final thoughts, Rawls doubled down on the latter point, saying, “They’re human; you’re human. Don’t sell so much, just be helpful.”

Rosenberg advised those in attendance to not “underestimate what a well-developed brand can bring to you. How you build a brand is just as important as how you insure your business.”

Easter said to “do it right (brand development) the first time, then put it out there.” 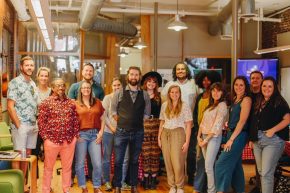 Here’s a group picture of the participants, panelists, and supporters.