“Making change through food is the heart and soul of what we are all about,” Bailey Foster, Founder of Real Good Kitchen, told those attending the first session of the semi-annual “Vol Court Speaker Series and Pitch Competition.”

Held virtually late yesterday, it was the first of four weekly workshops leading up to the finale – a virtual pitch competition on September 30. Nearly 40 people, the majority University of Tennessee, Knoxville students, viewed the discussion with Foster that was moderated by Shawn Carson, Lecturer in the sponsoring Haslam College of Business and its Anderson Center for Entrepreneurship and Innovation.

We have covered Foster’s challenging journey to create a combination community kitchen and culinary incubator, starting with this teknovation.biz article that published in October 2018 and continuing with this most recent update that posted in mid-March.

As we wrote all of those articles, we were inspired by the native Knoxvillians passion for the cause that she is pursuing. We frequently use the word “persistence” to describe her commitment. During yesterday’s discussion, Foster thoughtfully and caringly described her entrepreneurial journey. 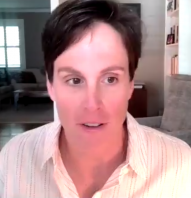 “I came pretty late to entrepreneurship,” she said, and the inspiration to do so was provided by what she described as a “sense of possibilities” Foster saw during years the family lived in two entrepreneurial hotspots – San Francisco and New York City.

When the family moved back to her hometown, Foster started “thinking about ways to make a difference in our city. Real Good Kitchen (RGK) grew out of my sense of market needs and a way to have an impact.”

Acknowledging that RGK is not an original idea – there are 200 shared commercial kitchens around the country, she described how she took knowledge of those facilities, particularly La Cocina in San Francisco, to shape the Knoxville business plan.

RGK is structured as a B Corporation, something that Foster emphasizes about the mission-driven nature of the enterprise. “Being a B Corp signals to your customers what your values are,” Foster told those viewing the session. “Profitability and impact are not mutually exclusive.” As an example, Foster noted that two well-known national brands – Patagonia and Ben & Jerry’s – are organized as B Corps.

She adds, “As much as it is about space, it’s the resources we want to provide for start-ups and those wanting to scale. Just because you are a great cook doesn’t mean you know how to run a business.”

Foster is also inspired by the fact that the idea is gaining traction with those who are not just wanting to be great cooks. “Quite a few folks are coming to us who want to do consumer product goods,” she says as one example.

As noted in this recent teknovation.biz article, “Vol Court” continues next week at 5:15 p.m. with Tommy Nguyen, Co-Founder and Chief Executive Officer of StoragePug, speaking on the provocative topic of “Growing Your Start-up: What Happens When Chaos Ensues.” Those interested in tuning-in can do so at this link.