During the keynote talk of the virtual “Let Her Speak” event last week, Angelique Adams stressed that finding your strengths is sometimes all you need to become a good leader.

“I truly believe that we all have unique gifts that we can give to the world and make a contribution,” she said. “That is something we can maybe think about that maybe our superpower is just us being ourselves.”

This event in the “Let Her Speak” series, a group started by Catherine Porth, was focused on “Seeing the Superhero in You.” In addition to the June 17 talk from Adams, attendees participated in a collaborative activity, networking, and an in-person happy hour on June 16. 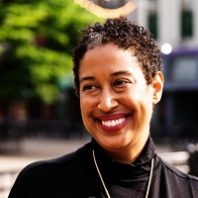 The collaborative activity helped the women who attended the session to find their own “superpower.” Around 40 people tuned-in to Adams’ presentation, where she talked about her journey to finding her leadership strengths. She said her attentive listening skills made people feel comfortable and welcomed. When Adams asked questions about their work, it made them feel like she cared about their progress.

“Not only was I having this impact on people, but my team wanted more of it,” she said.

Once she discovered this, Adams said she focused her energy on uplifting her employees while working at Aperam as the Chief Innovation Officer. She told listeners that often when women are nice, people question their results in the office. That myth needs to be “dispelled,” she said.

When executives at Aperam told Adams that her style of management didn’t fit in with the rest of the company, she said she had to do some soul searching. Should she stay in a job that she enjoyed, but wouldn’t let her be herself, or should she turn to a new career of helping others to find their strengths?

Adams chose the latter and has since been running her own company for the last eight weeks. She now focuses on helping underrepresented communities find their meaningful contributions.

While Adams said it is important to find your strengths, it is also important for people to figure out how to use them in their leadership style to impact their jobs and their colleagues.

After her talk, Porth opened the floor to questions from the audience. Adams talked about how she kept a balance of being attentive to her team, but also not letting herself get drained. Sometimes just taking notes and writing one question makes the difference.

“You can always ask one thing to let people know that you were paying attention,” she said.

Adams also opened-up about setting boundaries, saying it was a hard lesson to learn . . . that not everyone had to like her at work. Porth added that the difference between being liked and respected in the office is a key lesson.

When asked about what Adams does to impact external change in the corporate world, she said her focus is more on employees within a firm. She said this is because change can be very hard, and that she hopes the people she works with can build their leadership skills and inspire change.

“My focus is actually on the people who are trying to excel in their careers,” Adams said. “The people that you’re trying to change have to be open and willing.”

Adams, a local resident, is featured in one of the Knoxville Entrepreneur Center’s “Made for Knoxville” series. Click here to view it.