Chattanooga’s Allison Reedy has a new gig. In fact, it is so new that there is not even an official title.

The long-time alumna of CO.LAB, most recently as Chief Operations Officer, has joined another of the state’s entrepreneur centers. She will be leading the work of theCO in Jackson and its growing fleet of technology buses under the “driving innovation” banner.

We caught-up with the energetic Reedy, now using her married last name of Wolfe, at last week’s “Governor’s Conference on Economic and Community Development” where many of theCO team members were in attendance, showcasing two of the organization’s buses. It was also Wolfe’s first week on the new job after helping with the most recent “Startup Week Chattanooga.”

We learned that a third bus will soon join theCO’s technology fleet that includes the inaugural one, dubbed theLab, and a second one, named theVenture. The first bus is equipped with makerspace technology that theCO takes to K-12 schools. The second bus is outfitted for programming and workshops targeted at entrepreneurs.

Like Wolfe and her title, the third bus is still unnamed. They say it will focus on placemaking, taking a deeper dive into the community.

Jim Biggs, Executive Director of the Knoxville Entrepreneur Center (KEC), joined me on a tour of the two buses. One will be in Knoxville this week as KEC and theCO team explore collaborative opportunities, part of the expanded focus of theCO with grant support from Launch Tennessee.

Wolfe was Financial Controller at CreateHere, the predecessor to CO.LAB. After serving as CO.LAB’s Financial Director for three tears, she became Programs and Events Director before assuming her current duties in September 2016. In her new role, Wolfe will continue to be based in Chattanooga.

Here are exterior pictures of the two buses (theLab on the left and theVenture on the right) along with an interior photo of theLab. 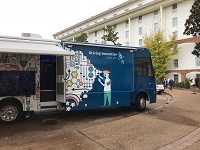 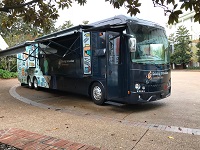 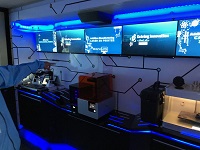