(EDITOR’S NOTE: This is another article in a periodic series spotlighting entrepreneurs who participated in the inaugural cohort of the Bunker Labs Knoxville Chapter’s “Veterans in Residence” program. That group, designated as “22 Alpha,” graduated in early June, and the next cohort, known as “22 Bravo,” is underway.)

The first half of this year was a busy time for Alex Weber. In addition to being a full-time MBA student in the Haslam College of Business at the University of Tennessee, Knoxville (UTK), he also participated in several programs that would help him accelerate his start-up focused on what he describes as extended reality.

Those activities included the inaugural cohort of the “Veterans in Residence” (VIR) program offered in 23 cities by Bunker Labs, a national organization with local chapters focused on military veterans who are pursuing entrepreneurship. That group met weekly. There were also two offerings from the Anderson Center for Entrepreneurship and Innovation (ACEI) in the Haslam College – the “Vol Court Speaker Series & Pitch Competition” and “Boyd Venture Challenge.” In the most recent edition of the latter competition, Weber won an investment of $20,000 for his start-up named D3D VR Studios. 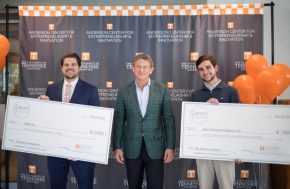 And, if that’s not enough, Weber also participated in the “I-Corps South Regional Fall 2021 Cohort” co-hosted by ACEI and the UT Research Foundation. (EDITOR’S NOTE: Weber is pictured here on the left with UT President Randy Boyd and Clay Franklin of Arid Delivery Products, the other start-up funded in the most recent “Boyd Venture Challenge.”)

You get the picture. The former U.S. Navy diver who grew-up in Spring Hill, TN near the former Saturn plant is laser-focused on growing his latest and most promising start-up, and Weber consumes information and help from a variety of sources. The newest venture is named D3D VR Studios is not his first start-up. One that drew on his electrical engineering knowledge failed. Even during his 10-years of service in the U.S. Navy as a diver, Weber had a side hustle power washing boats and yachts.

“I grew-up with a dad who was an inventor,” he told us recently, adding that his father reminded him, “If you’re going to do something, do it right the first time.” Those are important words for a military veteran.

As an undergraduate electrical engineering student in UTK’s Tickle College of Engineering, Weber recalls taking a course taught by Lee Martin, a legendary local entrepreneur who founded an ahead of its time virtual reality start-up named ImmersaCAD. Weber earned a minor in entrepreneurship, explaining that he was “turned on to entrepreneurship” after taking an introductory course taught by Shawn Carson, a Lecturer in the Haslam College.

So, how did his interest in the mix of augmented (AR) and virtual reality (VR) come about?

“It was October of 2020 when I bought an Oculus Quest 2 and was blown away by the possibilities of extended reality,” Weber told us. He explained that extended reality is a newer term that essentially removes the lines between augmented, virtual, and mixed reality, allowing for hardware and software to be developed to a standard.

Seeing a business opportunity developing content, he says he spent the next six months learning the tools and beginning to develop simple VR applications. Weber was helped along the way by Mark Collins, a Distinguished Lecturer of Marketing in the Haslam College, as he assisted the college in teaching its first class in virtual reality.

“I packed an M.S. in extended reality into six months,” he says, launching D3D VR Studios in December 2020 halfway through the self-administered training.

For the “Boyd Venture Challenge,” Weber showed four different scenes that illustrated how extended reality could be used for enhanced training, maintenance, inspections, design, quality control, and even workflow management. They were a construction site with safety violations, a logistics warehouse with a drivable forklift, a farm with active beehives, and a virtual office environment with a functional desktop.

“Those four spaces captured bringing extended reality into the workspace,” he said. They also clearly impressed the judges with the amount of funding Weber received.

For the most part, the Navy veteran has bootstrapped operations in addition to winning competitions and beginning to generate funds from paying clients. His wife has a degree in neuroscience, and they are collaborating on a possible Small Business Innovation Research application related to Alzheimer’s Disease and other neurodegenerative conditions.

Weber graduates this December with his MBA.

As a participant in the inaugural cohort of the VIR program hosted by the Bunker Labs Knoxville chapter, he says simply, “The VIR program has given me a purpose. It’s caused me to move faster. The camaraderie has been really beneficial, working with other veterans.”