An eclectic group of about 20 people showed-up for a breakfast meeting yesterday morning to learn more about the “Southern Appalachian AgriFood Innovation Cluster,” a new Knoxville-based initiative that we first spotlighted in this November 2021 article in teknovation.biz.

Organized by Memphis-based AgLaunch and hosted by the Knoxville Entrepreneur Center (KEC), the morning meeting brought together a couple of farmers from Union County, two representatives of Nourish Knoxville Inc. that organizes local farmers’ markets, several people from the University of Tennessee (UT), a venture capitalist, an intellectual property attorney, and at least two local technology start-ups from the agriculture sector.

All were invited to be part of helping define what AgLaunch Executive Director Pete Nelson said was an initiative to build the farm of the future that draws heavily on technology. “We’re trying to create a whole new culture around innovation,” he explained, describing what he characterized as an inflection point for the agriculture sector.

Part of the change is the declining cost of new technologies, but it is also being driven by a shifting business model for agriculture that is itself driven by changing consumer demands. As is the case with many such trends, the changes started in California before spreading to other regions of the country.

“The consumer train in the West has left the station,” Nelson said in reference to the shifting preferences of individuals that are impacting those in the sector.

The new “AgriFood Innovation Cluster” is funded by five-year, $1.5 million award from the U.S. Small Business Administration under the federal agency’s “Regional Innovation Cluster” (RIC) initiative. Awarded to AgLaunch Engine LLC, a wholly-owned for-profit subsidiary of AgLaunch, the funding is the second RIC grant that AgLaunch has received.

For KEC, it further solidifies an existing partnership that includes the annual “AgLaunch Bootcamp” that has been offered for the past several years and the newer agriculture sector-focused mentor network that the two organizations jointly operate with support from Launch Tennessee.

The geographic focus is on 240 counties located in the Southern U.S. Collectively, they comprise about 60 percent of the 420 counties in the Appalachian Regional Commission’s (ARC) footprint across 13 states. The new Cluster will encompass counties in seven of those states – Alabama, Georgia, Kentucky, North Carolina, South Carolina, Tennessee, and Virginia. 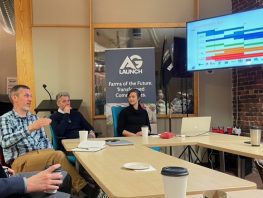 Attendees quickly offered suggestions that included: (1) precision agriculture/digital farming; and (2) broadening bioenergy to include more of the bio-based economy.

During the first year of the program, Nelson said the priorities will be to set-up operations, assess needs both formally and informally, begin some pilot programs, and “pour gas on anything that is already sparking.”

The first-year efforts will also include a return of the in-person “AgLaunch Bootcamp” July 11-14 and the feasibility of applying for an ARC POWER (Partnerships for Opportunity and Workforce and Economic Revitalization) grant.

The “AgriFood Innovation Cluster” initiative is guided by an eight-person Steering Committee that includes Maha Krishnamurthy, Vice President of the UT Research Foundation, and Michael Aikens, Director of Research and Economic Development at Tennessee Technology University.