The latest edition of the “AgLaunch Bootcamp,” an annual East Tennessee staple, kicked-off Tuesday with eight teams participating. And, since the yearly program is being delivered virtually for the first time due to the COVID-19 pandemic, the teams come from Tennessee as well as three other states – Minnesota, North Carolina and Ohio.

At yesterday’s kick-off event, AgLaunch’s Pete Nelson said, “We’re really about trying to help you. Our goal is to get the right resources around you.” Those resources are designed to help this year’s participants, whose ideas vary from very early to new spinouts from an established company, be successful.

“We’re in a changing time . . . a real exciting time to be in the innovation space,” Nelson added.  Describing the high failure rate of companies that should be successful, he suggested three key reasons.

“Much of the advice being given is the current state of agriculture, not where we see it going,” Nelson said. Others factors in the failure include a misalignment between corporate strategies and farmer interests along with venture capital investments being focused on unicorns, not real farmer needs.

After an overview by Nelson of the ag sector and the role of AgLaunch, Jeff Brown of The Biz Foundry led an explanation of the “Business Model Canvas” with participation from KEC’s Jim Biggs.

The participating companies are: 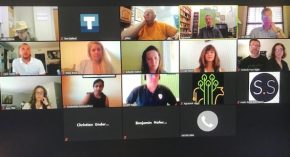