A good mix of local entrepreneurs in the agtech space, as well as supporters from a variety of organizations, showed-up at noon last Friday for the short pitches from the seven start-ups that had just completed the weeklong AgLaunch Bootcamp hosted by the AgLaunch organization and the Knoxville Entrepreneur Center (KEC).

Attendees at the event, held at the University of Tennessee’s (UT) Plant Biotechnology Building, ranged from administrators like Tim Cross, Chancellor, and Fred Tompkins, Interim Dean of Research, both of the UT Institute of Agriculture (UTIA), to previous participants in AgLaunch and KEC activities like Tony Bova and Jeff Beegle of the start-up formerly known as Grow Bioplastics, but now known as Mobius, and Alex Adams of GeoAir.

After a keynote presentation by Thomas (Bud) Hughes of Verdant Partners, a leading business brokerage firm in the global crop genetics industry, it was the opportunity for the seven company founders to share their updated pitches for their start-ups in a lightning round.

First up was Alex Lewis, Co-Founder and Chief Executive Officer (CEO) of Electro-Active Technologies that is commercializing an integrated, modular system for waste to renewable products such as hydrogen and an additive for better soil health. “We want to shift the paradigm from things going into the landfill to (them) being put through a renewable process,” he said. The other co-founder is Abhijeet Borole, a former researcher at Oak Ridge National Laboratory. Look for an upcoming feature on the company on teknovation.biz in a few weeks.

Walter Cromer, Founder and Chief Idea Officer at Eden Concepts, said he founded the company in February help farmers reduce their labor costs, starting with tomato growers who incur $350 million in labor costs annually. How’s he approaching the task? By eliminating a step in the process whereby pre-germinated seeds are planted directly in the soil rather than starting in a greenhouse before being transplanted to a garden.

The business focus of GoGreen Organics is to “make it easy to grow vegetables,” Randal Putala told the attendees. The company sees three versions of its technology – one for K-12 students, a second for home use where an individual could have 48 plants at any time, and a commercial version for which GoGreen Organics has filed a provisional patent application.

AGLighting Innovations is further along than most of the teams in the bootcamp. “We’re approaching $1 million in sales and 40,000 bulbs in the market,” Tom Ellsworth, Founder and CEO, told the attendees. The company markets a low profile, waterproof light for several agricultural sectors. Ellsworth noted the flat light does it not collect dust or get corroded like traditional lighting.

Jane Clark founded Project Fresh in 2016 with a simple goal – “to change the narrative,” she told the attendees. Clark added that she felt the need to provide food education for underserved populations. Through her nonprofit, the Memphis-based entrepreneur wants to empower students to make informed, healthy choices.

Newton RFID is marketing a product under the EquipassID brand. It is an injectable RFID (radio frequency device) that stores vital regulatory and health information. Mark Johnson, President of Newton RFID, said the initial focus is on the $39 billion horse industry that is underserved by technology.

Last week’s bootcamp was made possible through funding and sponsorships provided by the Tennessee Department of Agriculture, Launch Tennessee, Innova Ag Innovation Fund IV, UTIA, and the UT Research Foundation.

Here’s a picture from the event where Pete Nelson, AgLaunch President, is speaking at the start of the pitch event. 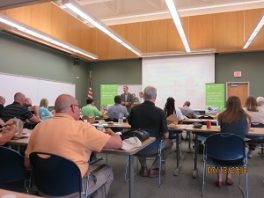